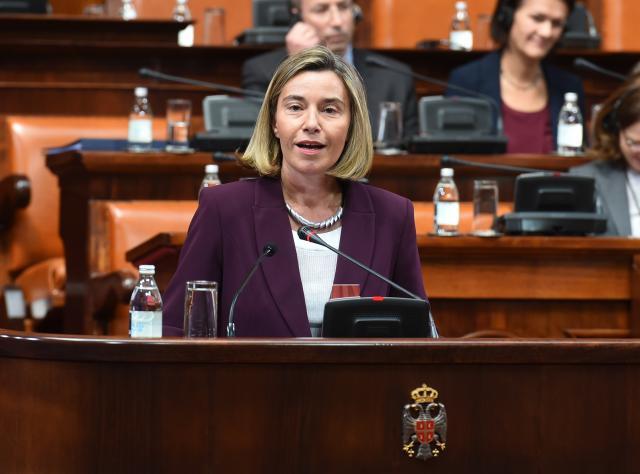 She made the remark during a meeting on Friday in Belgrade with Serbian President Tomislav Nikolic.

Mogherini "thanked Nikolic for his commitment to European integration and expressed her optimism regarding the future dynamic of opening new (EU accession talks) chapters," the presidential press office said in a statement.

Mogherini also "stressed the importance of continued dialogue between Belgrade and Pristina."

"The perception exists that full-fledged membership (in the EU) means making a choice between the East and the West. One certainly does nor rule out the other, and work needs to be done to change that perception," Mogherini has been quoted as saying.

During the meeting, Nikolic said that "tensions in the region are obvious," and reiterated "Serbia's commitment to peace and stability."

As he said, "tensions are growing and leaderships in some countries are not able to cope with the challenges that they face."

Nikolic "emphasized his concern over the situation in Macedonia and Bosnia-Herzgovina and stressed that the EU should continue providing support to maintaining peace in the region."

The president also "underlined Serbia's commitment to Euro-integration, expressing his expectation that the dynamic of the opening of new chapters would be accelerated."

"Serbia is actively working on meeting the conditions to become a full-fledged member (of the EU) and is talking to Pristina sincerely about normalizing relations. I don't know whether there will be additional conditions, and I hope there will be no conditions that we cannot fulfill, that is, to recognize Kosovo," the Serbian president said during his meeting with Mogherini

According to the statement, he also spoke about the migrant crisis, to say that the number of refugees in Serbia is increasing and that the country is doing its best to treat the migrants "in a civilized manner" - but expects the EU to find "a comprehensive solution to the problem."

Nikolic stressed that the migrants passing through this country "do not want to be registered in Serbia, out of fear that EU members might send them back to the country of registration."

"The migrant crisis has certainly shown which countries respect the rules they have undertaken, and the universal principles, in general," the Serbian president said.