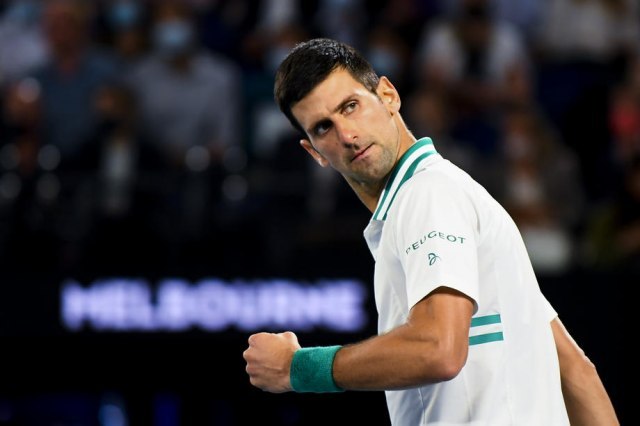 A Federal Court hearing to decide if Novak Djokovic's visa should be reinstated for a second time has resumed after a one-hour break for Stephen Lloyd's second hour of submissions.

Chief Justice Allsop says Mr. Wood is asking "where's the evidence" of people following Djokovic's lead in not getting vaccinated.

He says he understands Lloyd's submission is that one can use common sense and human intuition about people's behaviour.

Lloyd says the minister has to consider if Djokovic has now become an icon for the anti-vaccination groups, and what role him staying here would have in people not wanting to get vaccinated.

According to Lloyd, Immigration Minister Alex Hawke doesn't need to show evidence that Djokovic is influencing people's views to cancel his visa - just that there's a risk that he might.

He said Hawke made the decision to cancel Djokovic's visa in accordance with the Australia's Migration Act that enables the minister to bar someone who "may" or "might" pose a risk to public health.

We're back now to Nick Wood SC for his reply.

Wood is pointing out his earlier argument that the minister didn't acknowledge the part of the BBC article (which referred to Djokovic's early anti-vaccination sentiments) that there had been anti-vax sentiments shared in Melbourne this week in response to Djokovic's visa cancellation.

Wood points out again that any antivaccination events linked to Novak in any way so far have all been triggered by actions of the government against him, pointing out that if they'd just let him play tennis, none of the antivax sentiment would be stoked.

Mr. Wood says if the judges are in favour of Djokovic they'd want the same order as Judge Kelly gave the other day - that the decision be quashed and Djokovic be released from immigration detention within 30 minutes.

Chief Justice Allsop says they want to spend the afternoon thinking things over, and hope to make a decision later today.

The court withdrew to consider the arguments. As the Chief Justice said, he hopes that late in the afternoon he will be able to inform both sides about the further course and whether the decision will be made today or maybe tomorrow.

As things now stand, if the decision is not made in the early morning hours Central European Time - see you again tomorrow night to find out Djokovic's fate.

For now, that's it. We might get a finding/judgement later, we might get more court. Who knows. To anyone asking, we don't know with confidence which way this will go. It's literally getting argued on a very specific set of circumstances & minute legal technicalities.

Djokovic’s barrister in particular has was excellent! He put his case very well and fought hard.
I'm torn as to what will happen. I started in favour of Djokovic. Then thought the Gov't was in front. It's close. I'll stick with my original view that Djokovic wins. But only just

My prediction: Novak Djokovic will win today in court.

And will win tomorrow on court.