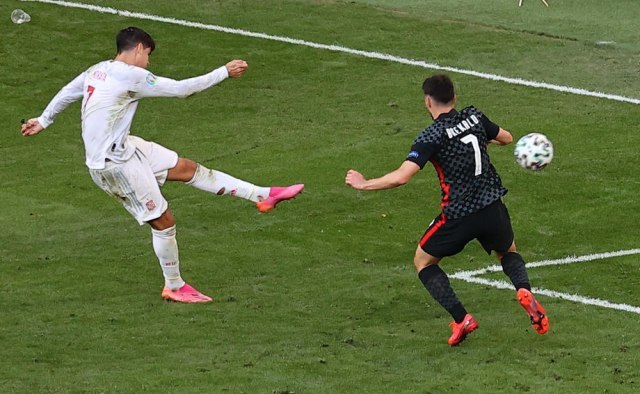 Spain dominated from the start of the match, not allowing Croatian football players to build action from the defensive ranks.

Spain goalkeeper Unai Simon’s massive blunder gave Croatia a 1-0 lead in the 20th minute when he failed to control a long back pass.

Spain gifted Croatia a bizarre own-goal in the first half and then threw away a 3-1 lead but Morata made it 4-3 when he controlled a cross with one deft touch in the 100th minute and sent a shot past goalkeeper Dominik Livakovic.

Mislav Orsic had pulled one back for Croatia in the 85th and Mario Pasalic equalized in injury time.

The Spaniards continued in the same rhythm in the continuation of the game, and the prize arrived only 11 minutes later.

Ferran Torres brilliantly lost to Cesar Azpilicueta, who scored his debut goal in the national team jersey. The assistant turned into the main protagonist 20 minutes later. Torres received the ball from the side and easily got rid of his keeper, after which he stayed 1 on 1 with Livaković.

The routine Manchester City football player solved that situation with a goal through the legs of the Croatian goalkeeper.

It was expected that the match was resolved, but Mislav Oršić did not think so. After the complete chaos in front of the Spanish goal, Oršić sent a shot from the five-pointer zone, which was rejected. However, it was done too late and goal technology showed that the ball crossed the line for 3: 2.

The Croatian coach took a risk, the changes were extremely offensive. They received the award for bravery in the 92nd minute, when Mario Pašalić equalized with a header. Croatia won overtime.

Just as the change in the form of Oršić brought Croatia overtime, so the entry of Dani Olmo brought the Spaniards a pass.

The former Dinamo Zagreb player first assisted Morata in the 100th minute, and then a few minutes later Oyarzabalu to confirm victory.

Croatia did not have the strength for a new return, so the match ended in the first overtime.

This was the third consecutive meeting of the two teams at the European Championships, considering that they were in the same groups in 2012 and 2016.

Spain was better on the European Championship held in Poland and Ukraine, when they did not only celebrated against Croatia, but won the entire tournament.