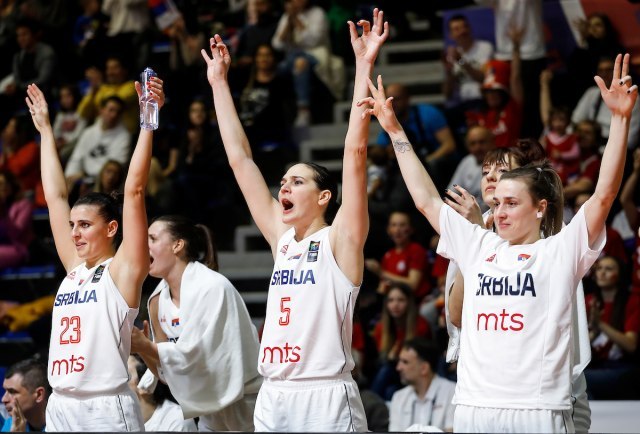 Women's basketball team of Serbia won a gold medal at the European Championship, after beating France 63:54 in the final in Valencia. Vasic will end her career after the Olympic Games in Tokyo, as she announced earlier.

"From the beginning, I say that I don't want too much attention, because I'm finishing my career. When I made this decision, I was aware that there is no better end than being here with them. And now when we talk about how I played the tournament, it's mostly because of them", said Vasić, Basketball Association of Serbia reports.

"I could now mention a player who comes up to me and says: Come on, Sole, you solve this. They get the best out of me," she added.

Sonja Vasić was chosen as the MVP of the European Championship in Valencia, and she was also in a prestigious All-Star Five of the Championship, along with Julie Allemand (Belgium), Emma Meesseman (Belgium), Endene Miyem (France) and Jonquel Jones (Bosnia-Herzegovina).

"The fact is that we've kind of rounded off the story of this generation. When it seemed unrealistic to win this in 2015, to be here at the top year after year and then repeat the gold again this year, I really think it's a phenomenal success for our generation", Vasić said.

"Aside from the result, the fact how we fight and how we play for our country is proof of how much it means to us, and it says a lot about the character of each member of this team," she added.

Speaking about the final itself, Vasić stated that it was the same as in 2015.

"When we meet some of our goals, there is no drama. In the final, it was the first game when we finally relax a bit. You see, a lot of players who played under pressure during the championship, are now starting to show their full potential. Now it was easy for me to play, because I know that I don't have to worry, I don't have to take responsibility", Vasić said.

"This was a game in which we routinely completed the tasks that Marina (Maljković) set. When we fulfilled our tasks, we knew it was impossible to lose," Sonja Vasic concluded.

Serbian basketball players are expected to perform at the Olympic Games in Tokyo this summer.

The reception of the European champions will be organized on Monday at 8 p.m. in front of the Old Palace in Belgrade.