The best, and ours. Once again, he looks at the world around him from the top of the Eiffel Tower. 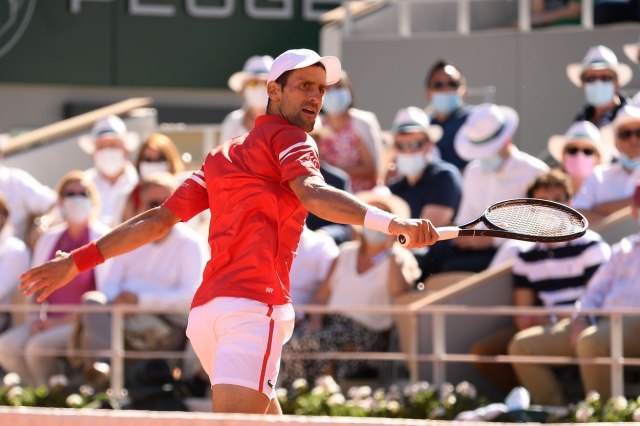 Those 85 seconds, as long as the intonation of the Serbian anthem "God of Justice" lasted, sublimated in Novak Djokovic's smile the greatest award for a masterpiece in the form of the second forged Coupe des Mousquetaires.

A brave tennis musketeer from Serbia, with his knight's sword, pierced the Achilles' shield, wrote one of the greatest pages in the history of tennis, and the lines of a new, modern Greek tragedy, without signing himself as Homer.

Many may not have seen it, but he saw it. Some may not have even dared to dream, but he did. Some did not believe, but he did. No, for Novak Djokovic, dear gentlemen, nothing is impossible. I guess that's clear to everyone now.

While he was standing on the victory podium, while the Serbian flag was being hoisted on the mast at the "Philippe Chatrier" stadium, there was no man whose heart did not tremble and tears of happiness sparkled in his eyes, that hadn't got chills from head to toe, in this tormented country, which has seen everything, but which is proud to have such champions.

Who? Well, Novak and Nikola.

Because could Novak have had more inspiration than the news that spread across all meridians last Wednesday, June 9, that a small Serbia has a guy who is the MVP in the great America, in the NBA empire? Hardly.

Could the great Nikola, before that, have had a better example in recent years than Novak Djokovic and his victories?

And now united in that week of sports happiness, we were all a bit Nikola and Novak, something sweet and warm spilled on our hearts when we watched Novak in Nikola's jersey, in Paris and remembered how happy Nikola was for Nole's numerous victories.

"I love you, brother," was Novak's message to Denver center Nikola Jokic. It shoots right at the target, at the heart. There is no defense.

Here are the sources on which Novak was recharging his batteries for these heavyweight matches, on the most brutal tennis stage in the world, on the famous Roland Garros clay, where the biggest dreams came true and at the same time remained buried deep in the reddish dust of those who threw their swords.

Only the greatest, only the toughest and most hearty, like Novak Djokovic, persist.

When everyone thought that after the gladiatorial clash with Rafael from Mallorca, he would suffocate in this final, when that handful of clumsy cocks followed on the model of the early crowing, Wimbledon ones, from two years ago, when the umpire Aurelie Tourte started making mistakes on to the detriment of Novak, he miraculously rose from the ashes of his game!

How is it possible? Didn't he act as if he was already groggy at that time, while Tsitsipas, a little immature, boyish, walked with his head raised too early, a little arrogantly, as if he had already touched victory. Didn't he watch that movie in which the victims were many others, who thought they had it in their hands, but were bitterly, bitterly deceived and gnawed because of it in the end? A youthful oversight, he is not to blame.

And Novak, as if in those moments of falling, repeated those Homeric verses from "Odyssey":

“Be strong, my heart told me, I am a soldier.

I've seen worse than this".

Remember the atmosphere: Tsitsipas leads, the noise in the stadium is strong, you can feel the vibrations that go to the side of the challenger, the young Greek, which is somewhat expected and normal, at least according to the "always cheering for the weaker". Yes, and that is fine, only when it does not exceed the limit of correct and good taste.

But as Novak in the third set, in that fourth game, used the fifth break ball for 3: 1, you could feel exactly that ebb of emotion from the side, how everyone started to calm down, how the shadow of doubt crept into their thoughts, when Novak began to straighten up and put things in their place.

"Noleaux realisme", here it is, a new tennis art direction, from the hands of the best possible national team, "a la Belgrade". Tsitsi plays, but he is already paralyzed by the poison of Novak's game, he no longer has that jumpiness, freshness, audacity, he feels that the racket in his hand is heavier, he misses, he gets annoyed, he bites his lips, he frowns. Novak, calm, in tone, develops the threads of the game in the desired direction, with a canvas background in his head, on which he painted one of the greatest works of art with his "tennis brush" only two days earlier, a little southwest of the artistic Montmartre. In the bourgeois west of Paris, on Porte d'Auteuil.

Someone commented nicely that on Friday, Matador Novak didn't even have to finish the job, the bull fell on the ground of the big bullfight.

Now a young lion from Mycenae has also broken its jaws. Our Novak is a hard nut to crack.

After another symmetrical match in 48 hours (unbelievable, four hours and 11 minutes for victories against Nadal and Tsitsipas!) We ask - where are these invisible, inexhaustible, Novak's space reservoirs, strength, faith, mental strength, yes, even they who are in favor of his biggest rivals, have no choice but to admit - “What's apparent now is that Djokovic is the most complete player of all time” (Patrick McEnroe). Yes, he proved that a long time ago, he only underlined this with this triumph. He wrote his name, in thick letters, in clay, and it is visible from the sky. Such a trace cannot be erased. There is no such wind.

And where are we now, after these two wonderful weeks? One step away from Rafa and Roger, one healing the wounds in Mallorca, the other transferred the ball to Halle, hoping that deep in the 40th at Wimbledon, he would be able to stop this attack of the Serbian tsunami in the campaign not only for the Grand Slam in 2021, but why not the "Golden Slam"?

If Novak says that something like that is possible, then why don't we believe that it is possible? Didn't he prove in front of everyone in this last performance of the winning formula that there is no impossible solution for him?

And so, now the fear of the tennis world is spreading from the outskirts of Paris, the long-recognizable fear that Novak will relentlessly continue in two weeks towards his ultimate goal, to be the first in history in all important parameters.

They feel, they sense it, so some of them rushed in their pathetic observations, only an hour after the finals, that he may be the greatest, but that he will never win their hearts.

Well, gentlemen, he doesn't need to win your heart, there's enough love for him in other hearts. While there is Serbia, he will be loved. Because what he said to Nikola, Serbia tells him - "We love you, brother."

Is there anything better than that?