A lot of factors influenced Nikola Jokić to become the best player in the NBA league, certainly one of the most deserving is Denver Nuggets' coach, Mike Malone. 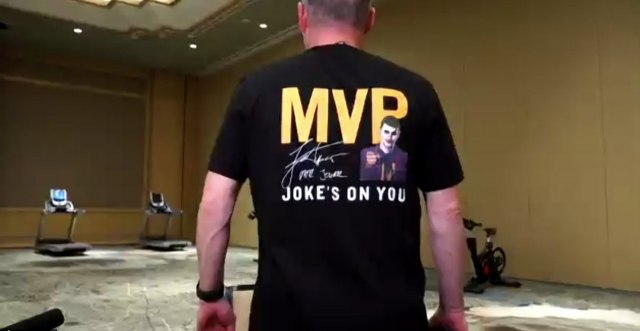 The Denver Nuggets coach believed in the Serb from the beginning, patiently and thoroughly working on his development and transformation from the reserve center, through the starter to the team leader.

Malone always emphasized Jokic's talent, his virtues and used them to the maximum while "shaping" the new MVP of the NBA League.

When the NBA officially announced that Jokic is the best, Malone was ready and put on a special T-shirt.

"Too skinny", "Can't jump", "Overweight", "Slow feet", "Bad attitude", "Poor defender", reminds Malone of all the challenges that Jokic has encountered since he joined the NBA league.

But the answer to everything is on the back of the T-shirt: "Joke's on you" with a photo of the Joker, Jokic's nickname in the USA.