This year, Roland Garros nicely entangled the members of the big three into one interesting, tennis Gordian knot. 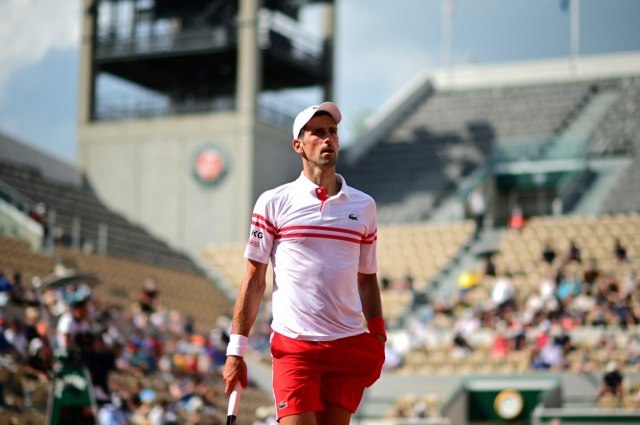 For now, all three behave just like Alexander the Great on the hill above Asia Minor, when the sages said that the king of Asia would become the one who untied the oxhide knot they had tied.

Rafa, Novak and Roger do not have a sword to cut a knot like the Macedonian king, but they have a counterpart to that - rackets, and on Thursday, on "GOAT day", in the manner of a great military leader, they cut the knot in their own champion way.

One step deeper for all three in the draw, one step closer to each other!

You see how tennis can be interesting based on the intricate draw, and thus gain extra dynamism.

Rafael Nadal, the absolute king of Roland Garros, has no problem saying:

"So what if the three of us are in the same part of the draw?" Sooner or later, we have to meet, and the younger guys deserved to have a little luck in the draw with their games. I am now the third holder", said Rafa so sincerely, from the heart, in that virtual conversation with Barbara Schett and Mats Wilander.

Rafa may be the third holder, but we all know very well that in the metaphysics of the Roland Garros order, he is "numero uno".

I would not like to make any premature assessments of predicting possible quarterfinal and semifinal collisions in the big three, but we are really closer to that option now.

Although a Grand Slam match can represent a gap as big as the Colorado Canyon between the two rounds, we know that the tennis giants who have been making steps of seven miles in these almost two decades of this sport are in the game.

Novak Djokovic, the first of the big three, came out a winner against Pablo Cuevas, probably still on the wave of the Belgrade energy, which he said was charging his batteries before the trip to Paris.

Novak does it smartly: He knows what kind of impulse he needs, he knows how to use the advantage of the moment and turn it into his victory. Do you see how he smiled at those pranksters from the top of one of the stands on Suzanne Lenglen, after a fantastically played point, just a few minutes after they tried to destroy his moment of concentration during the service.

"They do it all the time, do you think you can do something?" He addressed the judge in a serious tone, and when he saw that he was just politely warning them to calm down, he decided to calm them down in the manner he calmed down wild audience two years ago on match balls in the Wimbledon final against Federer.

And not only then, a novel can be written about it, but not now.

Novak, sometimes, needs something like that, to squeeze that extra moment of magic out of him, to play something phenomenal out of rage and thus shut everyone's mouth.

"Here you go, yell all you want," he seemed to tell them.

Cuevas, at least according to the position on the list (currently 92nd), may not have posed a great threat to Novak, but at the age of 35, with so much experience of playing on clay, he could certainly serve as an excellent training before bigger challenges.

By raising the game in the third set, he tested Novak, who only at times, showed those sparks of nervousness as in some previous matches. He slowly calms the tone of the tenors, and raises the intensity and quality of the game, in that champion, dosing manner, so that he doesn't sweat too much, and to feel the passion of the challenge again.

His Parisian consistency is amazing. Our Nole played his 350th Grand Slam match and recorded his 305th victory! Only Federer is ahead of him with more victories, 363.

One more thing, this was his 16th time in a row that he reached at least the third round at Roland Garros. Clay court may not be his favorite surface, but he manages it well and wins less often, this was his 76th in Paris in total.

And until the eventual match with Roger, what's next - a film in a Lithuanian / Italian co-production, with actors Ricardas Berankis and, if all goes well, Lorenzo Musetti or Marco Cecchinato in the round of 16.

Roger Federer arguing with the referee is all that we were left to see in 2021 😅#FS pic.twitter.com/GPUDGsrD8s

Roger Federer did not come out on the field much later than Novak. With a gap of 15 minutes, on "Chatrier", he started his duel with Marin Čilić.

It was nice to see the Swiss again in that ballet edition - he runs on the field as if on airbags, plays precise, sharp volleys, serves perfectly. Yes, he stumbled a little in the second set, got a tie-break in the third, but remember, his engine was turned off for a long time, he needs to warm up a bit, to work properly.

And it was worth seeing him because of the moment when, as if we were in one of the Parisian theaters, there was an argument between three confused actors, Federer and the judge, and then Čilić.

Marin was a little angry that Roger was going to get a towel between the points, while he was already ready to serve, and the referee, although there were still 13 seconds left for the Croat to serve, warned Federer!

Roger was puzzled, again showing that he was not running away from the quarrel, on the contrary, he also said that he enjoyed arguing a bit.

"It gave additional dynamics to the match, I like when it happens spontaneously sometimes," he admitted later.

But on the field it was sweet:

"Marine, am I too slow?", The cunning Swiss asked Marin, while the referee explained to him that the opponent was already ready to serve. But Federer did not see his guilt there.

"You're not slow, but I've been waiting for you on several occasions," Marin told him.

Federer stirred the water for a few more seconds until, after a three-minute drama, everything calmed down.

He may be an old man for tennis, but believe me, according to his foot work, it is not noticeable at all. He plays on freshness, inspiration, but I don't believe him when he says - "I really don't believe that I will get so deep into the draw or pass Novak's section of the draw".

Because yesterday, remember, it was exactly ten years since Roger's victory in the dust of Paris against the hot-tempered Novak in 2011 and his 41-0 series.

They played 50 times, but out of that, only twice in the Bois de Boulogne. Let's see if we'll witness the third clash.

How he caught Richard Gasquet, his regular customer, into his net at the start of the match, that was amazing. It's as if he decided to check upon himself, to see if his hurricane, furious game is still there...

Not that it was there, but at times it seemed scary. Although I laughed to tears when a colleague sent me a message via chat: Yes, I love watching Gasquet's one-handed backhands, it seems really beautiful to the eye, but what is it worth when Nadal has so powerful forehands, with the incredible intensity of the game, the terrible pace. It's not that he didn't sweat, on the contrary - Gasquet also decided not to go to the locker room with a bag full of potatoes, so that surprised Nadal a little, who saw the white flag at 6: 0 and 4: 1.

Joke aside, it's sometimes worth a little laugh, but Rafa is not joking in Paris and I emphasize once again, it will be abnormally difficult to stop him on the way to the 14th Cup.

In any case, the candidates for the GOAT title, for now, are doing well in Paris. These young people can still learn a lot.

On the other hand, Carlos Alcaraz showed that Spain does not have to worry, at the age of 18 he became the youngest participant in the third round at Garros, after 1992. It also happened that the hosts, the French tennis players, do not have a representative in the third round for the first time in the Open era! Here it is, the first weekend is coming, everything gets warmer, more nervous, more exciting.

Let it continue like this, it seems that we will have a great French treat...