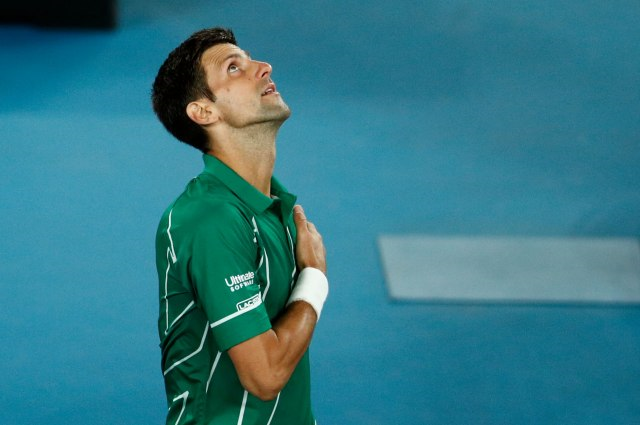 It took Serbian player almost three hours of play to reach his eighth semifinal in Melbourne.

An old acquaintance and a big rival Roger Federer, who eliminated Tennys Sandgren in quite a dramatic match, awaits him in the semi-final blockbuster.

Interestingly, whenever he reached semi-finals of the tournament in Melbourne, Djokovic would win it.

This classic 50th match between Djokovic and Federer is scheduled for Friday morning, from 9.30 CET at Rod Laver Arena.

As the sports world mourns the death of Kobe Bryant, long-time friend Novak Djokovic has staged his own tribute ahead of his quarterfinal showdown with Milos Raonic. Namely, Djokovic came to to centre court dressed in a tailor-made jacket sporting Bryant's initials and a love heart, paying tribute to Kobe Bryant, whom he called his mentor and friend.

“I don’t know what we can say, you know? It really caught us by surprise; he was one of the greatest athletes of all time," said a tearful Djokovic after he secured a semi-final with Roger Federer.

“He inspired myself and many, many other people around the world. I had the fortune to have a personal relationship with him over the last 10 years, and when I needed some advice and support, he was there for me", Djokovic added.

“He was my mentor, my friend and it is just heart-breaking to see and hear what has happened to him and his daughter”, Djokovic concluded, unable to control tears.