Ivanisevic for B92.net: If anyone can beat Rafa in Paris, it's Novak

It will soon be two years since Goran Ivanišević joined the team of the World No. 1, Novak Djoković. 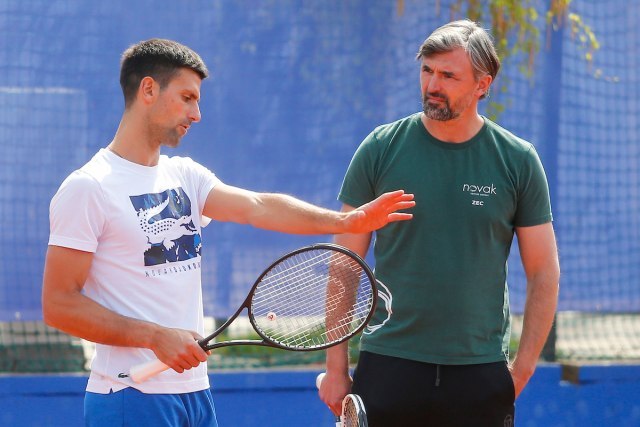 Cooperation between the former number two and the Wimbledon champion, with the winner of 18 Grand Slam titles, has yielded great results, especially with certain corrections in Novak's service, but Ivanisevic, Novak and Marjan Vajda, and other members of Djokovic's team are in for another week of great fight at Roland Garros.

Goran and Novak, who spent the week before the tournament in Belgrade, were joined these days by Marjan Vajda and they will jointly try to reach a common goal on the famous Paris clay, the 19th Grand Slam title for Novak, the second one in the Bois de Boulogne.

In an interview with B92.net, Ivanisevic talked about that cooperation with Novak, obstacles, challenges, and admitted that it is a great pleasure to cooperate with someone like Novak.

"In many things, he differs from other tennis players, but above all in our Balkan mentality. He is somehow special, different, more resourceful than others. He is like that both on and off the field, he is the best. I would say he is a genius, a perfectionist. Of course, it is not easy with him at all times, but it is a real challenge for me as a coach, and at the same time, a real trust and honor. Novak is never satisfied with the current results, he always wants more, better, what he did today is not enough for tomorrow and I guess that is why we are never bored", says Goran.

* You started your collaboration at Wimbledon, to which you have fond memories. This year is two decades since your title at the famous tournament, how does it feel to go back there?

"I'm getting old, time is going incredibly fast, it's been twenty years. I think that tournament was unrepeatable. Get an invitation to the tournament, play the semifinals for three days, it is unlikely that something like that will be seen again. It was always like that for me, when I should have conquer on Wimbledon, it didn't happen, but in 2001, I succeeded. I had always chosed the hard way, unlike the others".

* Boris Becker once revealed to us what his greatest success is in terms of a change in the game with Novak. The same question for you, what did you manage to change or what did you not?

"It's hard to say. He has formed a game... Maybe there is one thing that is difficult to change, as I say, he quarrels easily with the clock! I don't remember when he came on time when we agreed, but we are all used to it, we are pushing on, we know he will be late". * Goran, Vajda and Novak. Do you sometimes have all three different ideas on an issue related to the game and how do you deal with such things?

"Of course, that's why we're here. Marjan and I get along great, we complement each other and 99.9 percent have the same opinions. Of course, we manage to approach Novak with a common position, but sometimes we don't agree with him. He has different opinion, but that's why we are here to talk, but at the end of the day, he is the one who makes decisions on the field, he plays, he is the one who wins tournaments, we are here to help him, make it easier, prepare the best we can, but good conversation is always healthy. However, we spend a lot of time with him, we know how he feels both when he is in a good mood and when he is in a bad mood, tired and super happy. We have to deal with all that and we have to help him get the best out of it all”.

* Novak is on his way to the 19th Grand Slam trophy, but Paris is Rafa's territory. Novak is still one of only two players who managed to beat him there. What do you think are the chances that Novak will win this tournament again, especially after that match in the final of the Masters in Rome? Are you more optimistic now than you were in Paris this fall?

"Honestly, last year I was totally convinced that Novak would win Paris and I totally missed, that's why they criticized me. The tragedy is that you can no longer have your own opinion, I had my reasons, why I say that. And unfortunately, Novak appeared in the finals, he came late, and you can't give Nadal that. Nadal is the king of that field, the king of Roland Garros, a 13-time winner and an absolute favorite. In my opinion, there is only one favorite of the tournament, and that is him. The only person who can get him on that journey is Novak. This year, one strange thing is happening at Roland Garros, and that is that Nadal is the third seed and can play with Novak in the semifinals. Honestly, if I made a draw, I would put the two of them in the semifinals, I think Nadal has a better chance of winning in the semifinals than in the finals. That is my view, Novak is better in the semifinals, and Nadal in the finals, exclusively on that field. But the only person who can stop him is Novak, but he has to be 800 percent ready, to stay on the field for 20 hours and he still has to believe in that. He showed up in Rome recently, in a match he played against Nadal. He could have won a match in two sets, in three sets, he could have lost in two, but he lost in three. They seemed to have a great respect for each other at some point. Nadal is vulnerable, he can be defeated, and Novak can certainly do that".

* What have you been working on lately when it comes to working on the game for Roland Garros?

"It was seen in Rome that he was playing better and better. That match with Tsitsipas helped him a lot. He finds his game, he started to move better, his lungs are wider, it seems to me that he can endure more. There are some little things left, to put it all together, a little service and some punches. What he showed in Rome and in training, it seems that he is getting better and better, a few more matches and he will be better. It will definitely be interesting in Paris".

* Do you talk with Novak about that so-called "race for GOAT" and what do you think about it at all?

"Every Nadal fan will say it's him, every Federer fan will say it's Roger, and Djokovic's fans will say he's the GOAT. In my opinion, not because I am part of the team, remember that I have said before that he is the most complete and best player, seen in the last 11 years in tennis. He is the best tennis player in terms of Grand Slams and rankings, victories and everything else. But, that story about Grand Slams remains and it will always be a topic, but I repeat, for me, Novak is GOAT, whatever happens in the future".

* There is constant talk about that change of generation, about the arrival of young players. Which of them leaves the biggest impression on you and why?

"My favorite has always been Tsitsipas. I like the way he plays, he plays with all his heart, he has that Greek temperament, which I like. There is also Medvedev with his strange technique, he is interesting. Shapovalov, he is left-handed, and I really like him, he has a good energy. Tsitsipas and Shapovalov are my favorite players. Tennis is in good hands and when the big three finish their careers, new players will come", concluded Ivanišević in an interview for our website.