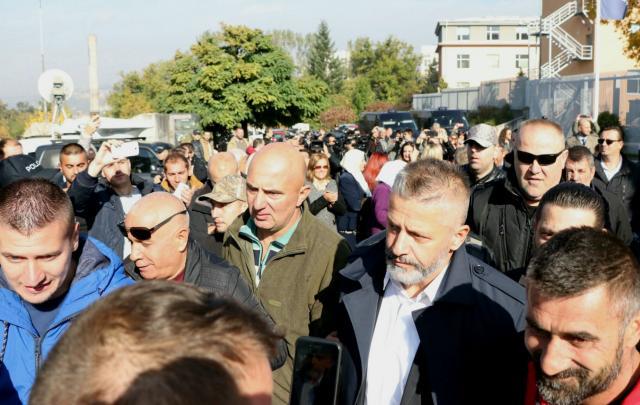 Oris is seen in Sarajevo on Monday (Tanjug/Fena)

"The lives of Serbs are not obviously not worth as much as the lives of others. Serbian tears have no parents. For justice, we will have to fight by ourselves and we will have to be ready to be the only ones getting accused," he said, adding:

"We must not whine, cry, but also not curse. I urge all Serbs not to show and say any harsh words against our Bosniak neighbors, but to build friendship and the future. No court can hide the truth," he added.

Vucic also said that Serbia will fight with "a strong economy, greater unity and work."

The decision of a Bosnia-Herzegovina court to free Oric is yet another confirmation that there is no punishment for murderers and criminals like Oric, Serbia's justice minister, Nela Kuburovic, said earlier in the day.

She was reacting to the news came that Oric, a former wartime commander of Muslim formations in Bosnia-Herzegovina, was acquitted of charges of war crimes committed against Serbs in the first instance ruling.

The decision also proves that there no justice for Serb victims, Kuburovic said.

"Does the one who has killed civilians in the most brutal ways, who gouged out the eyes and cut throats of Serbs in the village of Zalazje, remain innocent of the crimes he has committed? Are the dozens of eyewitnesses and witnesses of these sad and dark memories not sufficient evidence to make sure killers and torturers are served justice and punishment?," she asked.

Mentioning some of the Serb victims by name, she said that with such rulings, "the dead eyes of Slobodan Ilic, Milutin Milosevic, Mitar Savic and many others remain deeply buried in the black memories of their families, friends, and all of us."

"The dark truth has opened its eyes today - that only the names of executioners of Serb victims are unknown - the names of those who took their lives in the most brutal way. Does justice and law not know murder, rape, gouging of eyes, torture of old people and children, only because they are Serbs? Is this the reconciliation that the countries in the region strive toward?," Kuburovic asked.

"We in Serbia see the victim, the pain, the murder, the crime committed... not whether somebody's a Serb, a Croat or a Bosniak (Bosnian Muslim)" she added.

The minister emphasized that "everyone must be held responsible for what they have done - and we will not give up on that."

"I believe that the Belgrade Higher Court, which is still prosecuting Naser Oric for war crimes - the murder of nine civilians - will continue with this case because the least we owe to the Serb victims and their families is the truth about who took their lives," said Kuburovic.

"Serbia will not give up the policy of reconciliation and good neighborly relations in the region, but all countries must equally want it and be committed to it," she concluded, according to a statement from the Ministry of Justice, cited by Tanjug.

Oric was arrested in 2015 Switzerland on a Serbian arrest warrant, and then extradited to Bosnia-Herzegovina, where he was put on trial on charges of war crimes committed against Serb prisoners in the Srebrenica area of eastern Bosnia in 1992.

In 2006, Oric was put on trial by the Hague Tribunal, found guilty on one count of the indictment, and sentenced to two years in prison for his "indirect responsibility" for the murder of seven and torture of 11 Serb prisoners in 1992 and 1993.

But two years later, Oric declared innocent by the Hague's Appeals Chamber, which found that there was "no doubt that grave crimes had been committed against Serbs in Srebrenica from September 1992 until March 1993" - but that "evidence of crimes being committed in insufficient to sentence an individual."