The 21st anniversary of the start of Croatia's military-police Operation Storm comes at a time of extremely strained relations between Serbia and Croatia. 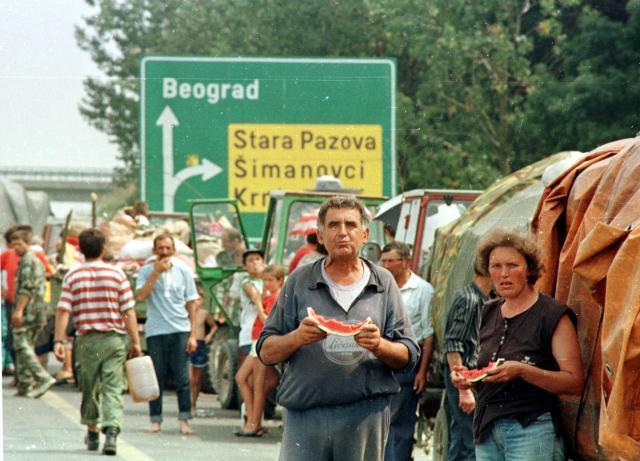 Refugees are seen in August 1995 (Tanjug)

Operation Storm, that started this day in 1995, resulted in the expulsion of more than 200,000 ethnic Serbs from Croatia.

The anniversary will be marked in Belgrade in the predominantly refugee settlement of Busije near Zemun. Prime Minister-designate Aleksandar Vucic, President of the Serb Republic (RS) Milorad Dodik and "the girl from the refugee column," Jelena Saric, will address the gathering.

In addition, within the central state event marking August 5 - Day of Remembrance of the Suffering and Persecution of Serbs - Serbian Orthodox Church head Patriarch Irinej will lead a memorial service dedicated to all the victims, the Serbian government has announced.

On Friday in Valjevo, a town in western Serbia, sirens will sound at noon in honor of the victims.

The anniversary of Operation Storm comes as a time of extremely strained relations between Serbia and Croatian. The harsh rhetoric and harsh words are coming from all sides.

Serbian officials are pointing out to the rise of fascism and Ustashism in Croatia, with the rehabilitation of Alojzije Stepinac, the overturning of the war crimes verdict against Branimir Glavas, as well as the unveiling of a monument dedicated to Ustasha terrorist Miro Berisic all causing problems in relations.

With this context in mind, PM-designate Vucic recently sent a letter to EU officials, asking that they react to "the anti-Serb campaign."

In Croatia, officials are saying that Serbia "should turn to the future," while the new leader of the HDZ party Andrej Plenkovic on Wednesday said that Croatia as a member of NATO and the EU and would not be "lectured" by Serbia.

In Croatia, August 5 has for years been marked as Day of Victory and Homeland Thanksgiving for Operation Storm. Last year, a joint session of the governments of the Republic of Serbia and the Serb Republic (RS) declared August 5 a day of mourning both in Serbia and in the Serb entity in Bosnia-Herzegovina.

The Youth Initiative from Croatia recently launched an online petition aimed at offering an apology to Serbs because of Operation Storm. The Initiative's representative, Joco Glavas, admitted that the response has been "disgraceful" - with only 300 people signing it.

The Documentation and Information Center Veritas said that its records contain the names of 1,856 dead and missing Serbs during and after the campaign, of which the fate 1,019 has been determined so far. 837 people are still listed as missing, of which 613 civilians, including 308 women, according to a statement.

About 130,000 members of the Croatian Army took part in Operation Storm, supported by NATO, as well as units of the Croatian Defense Council (HVO) and the Army of Bosnia-Herzegovina (ABiH). They entered the capital of the former Republic of Serb Krajina (RSK) Knin on August 5, 1995 .

The attack on the area came despite the fact it was under UN protection, while representatives of the former RSK in Geneva and in Belgrade rejected a proposal of the international community about a peaceful resolution, the so-called Plan Z-4.

Weak resistance was offered by the approximately 40,000 members of the RSK Army and about 10,000 people from the armed formation of Fikret Abdic's former Autonomous Province of Western Bosnia.

Operation Mistral, that followed Operation Storm, saw Croatian army in conjunction with the 5th Corps of the ABiH kill 655 and expel some 125,000 Serbs from the territory of 13 municipalities in Bosnia-Herzegovina.

A first instance judgment passed by the Hague Tribunal in April 2011 determined that Operation Storm was a joint criminal enterprise led by then Croatian President Franjo Tudjman, and that its purpose was the forcible and permanent removal of the Serb population, and the settling of Croats in that area.

The tribunal then reached e second-instance verdict in November 2012 and acquitted those it had put on trial - Ante Gotovina and another former Croatian general, Mladen Markac.

They were found not guilty of the persecution of the Serb population from the Knin Krajina in 1995. In the first-instance verdict Gotovina was sentenced to 24 years, and Markac to 18 years in prison.

The Hague Appeals Chamber acquitted the defendants on all counts, although the crimes specified in the first instance ruling had not been negated.