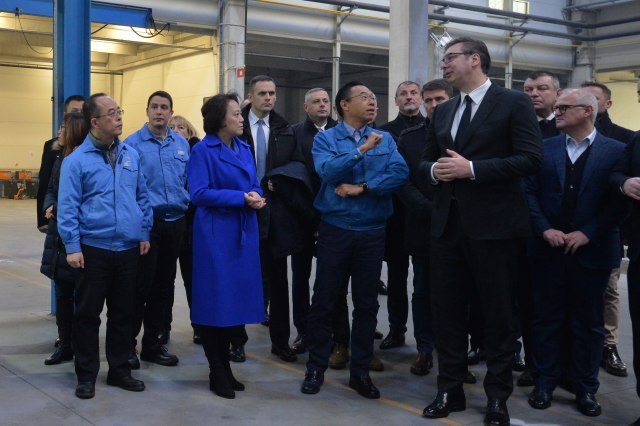 "This factory employs 3,000 people today. I was amazed at what they showed me, but for that, we need to have trained people who can make progress" Vucic told the young workers of the factory.

Vucic visited the foundry and the plant facility for machine processing, after which he spoke with the students of the Technical School in Obrenovac. He attended training for new employees, as well as a lecture for students of Obrenovac's Technical School, which is organized in that company.

"I am especially happy for the opportunity to pursue dual education despite huge resistance. I am happy that there is such a strong and powerful factory in Obrenovac", Vucic said.

President emphasized that the state helped a lot in opening the factory in Obrenovac.

"Many were skeptical at the time, and today there are 3,000 workers here and there will be more in the future," said Vucic. "I was attacked by journalists saying that the contract would say that there would be 700 workers, and that I said 1,500. Today there are not 1,500 but 3,000 workers. Today, 3,046 workers are employed in Obrenovac, where there was no factory for 50 years," Vucic said.

"I am pleased that those who criticize us have to admit that we are making progress faster than some developed countries in the West. Can we do it faster? We will do our best and that is why 'Program 2025' is important for us to fulfill and be dedicated to its implementation”, Vucic said.

The first factory in Baric near Obrenovac was opened in April 2017, and the second in June last year. MEI TA invested EUR 150 million in two factories in Obrenovac, employing 3,050 people. There is a need for new employees and that is why they constantly organize training for new employees. 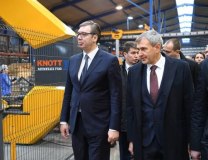