The First Joint Committee of the governments of Serbia and the United Arab Emirates (UAE) was held on Tuesday in Belgrade. 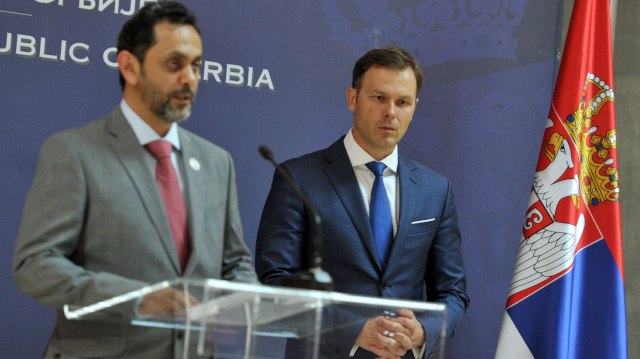 The meeting was co-chaired by Serbian Minister of Finance Sinisa Mali and UEA Minister of State Sultan Ahmed al Jaber.

Mali pointed out that the United Arab Emirates is a very important political and economic partner of Serbia, and that the strength of this cooperation is best illustrated by the fact that in 2010, investments from that country stood at about EUR 300,000, from 2013 this figure started to grow, reaching an amount of approximately EUR 180 million in 2018.

This means that in a few years the value of Arab investments in Serbia has increased by as much as 600 times, Mali said, according to the Serbian government.

The Joint Committee session resulted in the signing of three important documents - the Protocol from the Mixed Committee Meeting, the Memorandum of Understanding between the Ministry of Agriculture, Forestry and Water Management of Serbia and the Ministry of Climate Change and Environment of UAE on cooperation in the veterinary field and the Agreement on Cooperation between the Federation of Chambers of Commerce of UAE and the Serbian Chamber of Commerce.

Sultan Ahmed Al Jaber praised the economic reforms that the Serbian government has undertaken over the past years.

He recalled that UAE investments in Serbia amount to approximately $4 billion through direct investments and strategic partnerships in a number of sectors of common interest.