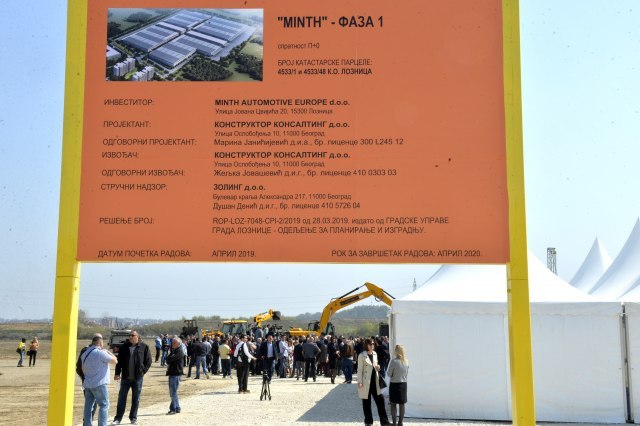 The plant will be manufacturing aluminum car parts.

The factory will employ 300 workers initially, and hire another 700 later.

This investment is worth 100 million euros, and it will be realized in two phases.

Serbian President Aleksandar Vucic attended the ceremony marking the beginning of the factory's construction, to say that the new Chinese investment in Serbia will be a milestone for Loznica, and will mean a lot for the whole of Serbia.

Vucic assessed that it was a turning point in the development of the city and expressed his hope that Volkswagen will have in mind that there is an increasing number of auto parts manufacturers in Serbia when deciding where to build their new factory.

The president pointed out that MINTH is at the same time of crucial importance for the development and survival of Loznica, Jadar, and the Podrinje region.

"For the last 30 years, we have only survived here without major factories that had been devastated. For the first time, we bring investors and build a new future for Loznica. Whether somebody wants to admit it or not - that's reality, that's what's correct," he underlined.

Vucic recalled that the state has already given 6.2 million euros for various infrastructure projects in Loznica. He said that works on the local hospital would resume after being abandoned in 1987.

Ahead of today's groundbreaking ceremony, Tanjug said that the new plant will start producing auto parts as early as October.

The factory will be a 100 million euro investment and it will hire 1,000 workers, he said.

MINTH exports its products to Australia, Europe, North America, Japan and Southeast Asia and its customers have an 80-plus percent share of the global market, Tanjug said.