Aleksandar Vucic attended on Saturday the groundbreaking ceremony for a new Shandong Linglong factory in Zrenjanin, the northern province of Vojvodina. 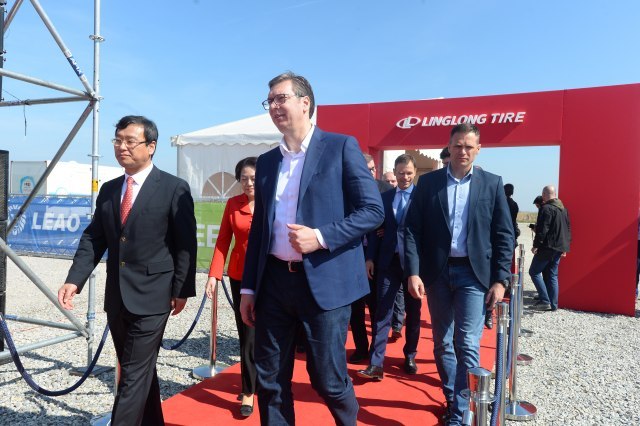 This is the largest investment in Vojvodina worth more than EUR 800 million and that the whole Serbia will have huge profits from that factory, the president said, according to the Serbian government.

The president laid a cornerstone with the representatives of the Shandong Linglong factory, which marked the beginning of the construction of the factory.

"I am extremely proud that we will open this factory in Zrenjanin and Banat and create 1,200 new jobs, but will be able to spend more money on the road network, theatrers, promenades and other infrastructure. But it also means higher salaries and pensions," Vucic said pointing out to the huge benefit for the whole of Serbia from Linglong.

"We will completely connect the central Banat and Novi Sad and with Belgrade, Pancevo and Vrsac and Zrenjanin will be on every road and rail map. This will ease the arrival of new investors in Zrenjanin, if there are still unemployed people in that city," he said.

"Our Chinese brothers, thank you for everything you did for Serbia, this is a great day, I am so honored and proud, "Vucic said.

The Chinese factory will employ 1,200 workers and produce 13 million tires a year.

The factory will be the largest in Serbia so far, with an area of ​​500,000 square meters, and its construction in Zrenjanin is an indicator of the excellent relations between Serbia and China and a favorable business environment in our country, the government said on its website.

A day earlier, on Friday, Linglong became the sponsor of Serbia's top flight football competition, which will now be renamed to Linglong SuperLiga. The Chinese company's is also one of the sponsors of Juventus in Italy and of Wolfsburg in Germany, among its diverse sports sponsorship portfolio.