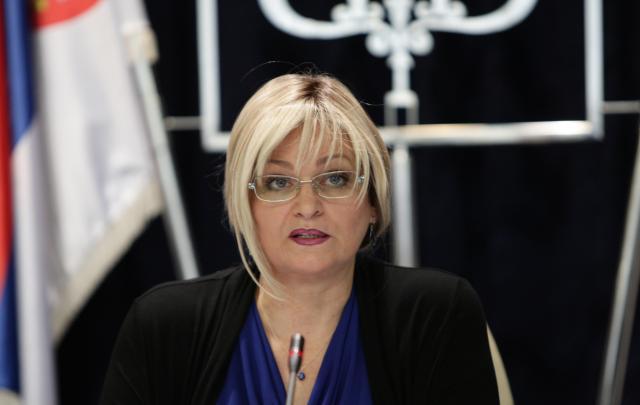 The country's financial system succeeded in remaining highly capitalized, highly solvent and stable in 2016 despite the risk that resulted from developments in the eurozone and divergence of ECB and FED monetary policies, Tabakovic added.

Speaking at the presentation of the Annual Financial Stability Report for 2016, the central bank chief said internal and external economic imbalances had been reduced last year and that investor confidence had been maintained and GDP growth accelerated to 2.8 percent.

She particularly stressed that by coordinating fiscal and monetary policies, Serbia's risk premium dropped to 140 points.

"Such figures are unheard of," Tabakovic said.

"The cycle of key policy rate cuts, launched in May 2013, continued into 2016," she said. "The key policy rate was cut to 4 percent – its lowest level in the inflation targeting regime. As a result, and given the falling risk premium of the country, interest rates on corporate and household loans declined, whilst government borrowing costs fell to their lowest."

"The extension of household loans stepped up further in 2016. Acceleration of economic activity, favorable trends in the labor market and a further decline in interest rates on loans impacted the growth in loan demand. As a consequence of higher demand and the supply of loans, the volume of new household loans was by 33 percent higher in 2016 compared to 2015, with close to 75 percent pertaining to dinar (RSD) loans," she said.

Tabakovic noted that "the achieved results of overall economic policy have been confirmed by the IMF, credit rating agencies, foreign investors and the EBRD, which was the first international financial institution to issue dinar securities in the Serbian market."

The issue of these securities gave a contribution to the process of dinarization, which is one of our priorities, the governor said, adding that the results have also been confirmed by Serbia’s progress on the Doing Business list, with the country ranking among ten countries that achieved the strongest progress.

"I can say with great pleasure that the National Bank of Serbia’s Action Plan for implementation of the NPL Resolution Strategy has been fully implemented, within the envisaged deadlines," she announced.

"By analyzing the risks that may jeopardize financial stability, we always aim to act preemptively, among other things by enhancing the regulatory framework in accordance with the EU acquis and the Strategy for Introduction of Basel III Standards in Serbia," Tabakovic said, noting that the regulations transposing these standards in the domestic legislation were adopted in December 2016, with the start of application on June 30, 2017.

"Behind us is the year in which, owing to efficient coordination of monetary, fiscal, microprudential and macroprudential policy, macroeconomic stability of the country has been preserved and the resilience of the domestic financial system strengthened. The National Bank of Serbia will remain committed to long-term stability of our financial system, in the general interest of all participants, this being a precondition for long-term sustainability of economic growth," the governor concluded.