"That hill has to go; Milosevic wanted to burn it with fire"

President Aleksandar Vucic says it has been decided to solve the problem of a flimsy supporting wall on the Corridor 10 highway by removing an entire hill. 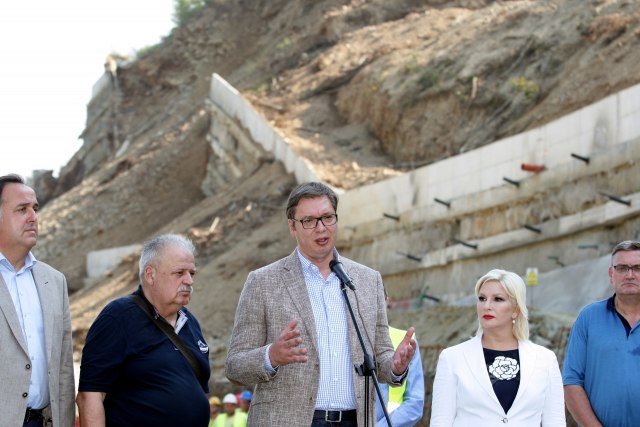 Vucic said that various proposed solutions had been analyzed, and that the decision was made to "cut off the entire hill and move it to the other side" because this whole area (in Grdelica Gorge in southern Serbia) is prone to landslides.

"Sloba (Milosevic) wanted to use cannons to fire at it from the other side, the hill will be torn down and it should be transferred to the other side, so we can control the landslide fully via galleries," Vucic told reporters.

He then observed that "the most brutal campaign against everyone who every worked on this" had been led over the previous ten days.

"That's how we do things is Serbia. First we shoot both out feet and arms, and then must work on - but with no arms and no feet. Now we must continue working like that. The problem is that nobody wants to work here now, take the risk, because it's clear what they'll face," the president said.

"I expect this hill to be torn down in a few days with this new solution, because it's obvious that what hasn't fallen already will fall," Vucic concluded.