Murder of another journalist uncovered in Kosovo

The Journalists’ Association of Serbia (UNS) found that the journalist of RTV Pristina, Krist Gegaj, was killed in Istok in September 1999, three months after the arrival of international forces, but his name has not been found in any records of the victims.

Although Gegaj was a well-known personality as a TV journalist, the media did not report on his murder, but UNS investigated this case, and found that most of his colleagues did not know that he was killed.

The name of Krist Gegaj is new in the UNS Dossier on Killed and Missing Journalists, where so far there are 14 registered and kidnapped journalists and media workers for the territory of Kosovo from 1998 to 2005. None of these tragic cases have been prosecuted.

Krist Gegaj was one of the two commentators and editor in Albanian-language program of RTV Pristina. He edited Dnevnik and news on radio and television.

- He was born in Metohija, in Klina. He was modest, benevolent and quiet man. He came to see me in 1997. There were few journalists among Albanian-language editorial, so I hired him to work on television and on the radio. Although he did not work as a journalist before, he worked well in this business. Until 1999, he had no problems in his work. However, in April or May of that year he came to me and asked me not to come every day to work because it was dangerous. I said to him: My dear, you estimate, when you can come. When our army and police retreated, and when our people left, he stayed in his place because he thought he had never done anything to anyone. This was obviously a fatal assessment - says for UNS Dossier about killed and missing journalists Miladin Jovic, former director general of RTV Pristina.

According to information received by the UNS, Krist Gegaj disappeared on September 12, 1999, three months after the arrival of international forces in Kosovo. On that day, around 7:00 AM, he took the cattle to the field, about 200 meters from the house. Since then he has not been seen alive anymore. Family and friends searched for hours, and around 22:00 hrs, they reported the disappearance at the closest KFOR checkpoint. The soldiers told them to go to the KFOR base in Istok tomorrow.

The next day, on September 13, 1999, Gegaj's body was found in a nearby river, two kilometers from the house. He was shot and killed with bullets in the head and the heart. In a nearby bush, KFOR found Coca-Cola cans.

Two weeks before the murder, three men were seen several times near Gegaj's house. They were noticed by the children who kept the cattle and described them as two very tall and one short men. The two were dressed in black, and the third one worn brown trousers and a black shirt. One of them addressed the niece of Krist Gegaj and asked if she was alone or if he was with her.

There is no doubt that this was a politically motivated murder, Jovic adds.

- Those who were loyal to Serbia are almost gone. Or they were killed or had to leave Kosovo and Metohija - he concludes.

The OSCE added the name of Afrim Maliqi

When the UNS brought to the center of attention the issue of unlawful crimes against colleagues, and requested international organizations and Kosovo institutions information on the investigations, at the beginning of this year, the OSCE mission added the name of Afrim Maliqi on the list of murdered journalists.

Maliqi was a journalist of the newspaper "Bujku". He was killed on 2, December 1998 in Pristina, in the Sunny Hill neighborhood. According to the testimony of his daughter, Gresë Maliqi, at the time of the murder, her father was in a vehicle with his best friends, Hizri Talla, one of the KLA commanders in the operational zone Llap, and student Ilir Durmishi.

- Witnesses, Albanians who could see what happened through apartment windows, heard that people who were shooting at them spoke Serbian. They saw a wounded girl, but she never wanted to testify because she was scared. As far as we know, the Serbian police came quickly, a few minutes after they were killed. Also, the Serbian prosecutor, together with the police, went to the crime scene. We do not know what exactly happened, because we do not know anything for sure, says for the UNS Dossier Gresa Maliqi.

She claims that her family was not allowed to talk to the police.

- Until the next day, they did not allow us to take over my father's body. My family members did not speak to members of the Serbian police about this case because it was not requested. The hospital report stated that three of them were killed from a rifle but does not mention with how many bullets. On the other hand, the Serbian police told one of my family members that my father was killed with more than 30 bullets – says her.

For now, there is no investigation into my father's and his friends case. Perhaps, because it was war time, and most of the casualties in the war remain largely unexplored - she says.

Afrim Maliqi was born on December 1, 1965. He graduated and began his MA in Albanian language at the University of Pristina. He was one of the founders of the Cultural Center in Podujevo in 1990. Since 1992, he worked as a teacher at Podujevo Elementary School, and two years later began his journalistic career in the newspaper "Rilindja," which he continued in "Bujku" newspapers. He initially reported on culture and education, and since 1995, on politics.

- The first such text was published on February 15, 1995 in "Bujku", and speaks about Albanians employed in the Serbian administration, that is, that they were discriminated and plundered. He wrote about the massacres, murders, burnt villages - says his daughter.

Afrim Maliqi, Hizri Talla and Ilir Durmishi in Kosovo have been proclaimed national martyrs, and three streets bear their names. Also, in 2013, former Kosovo President Atifete Jahjaga awarded Maliqi the Order of Freedom, and in the cultural events "Kadri Kadriu," the award for best poetry is named after Maliqi.

On the other hand, the name of Krist Gegaj was completely forgotten, and in conversation with his colleagues, we learned that his political engagement also affected family relations.

In the coming months, within the Dossier on Killed and Missing Journalists, the UNS will publish data gathered in investigations of murders and kidnappings of colleagues in Kosovo between 1998 to 2005, and will indicate flaws and closure of cases without a genuine initiation of investigations against perpetrators.

The Journalists’ Association of Serbia, established in 1881, is the largest and the most significant association of professional journalists in Serbia and a full-fledged member of the International Federation of Journalists (IFJ)

Serbia's First Deputy Prime Minister and Foreign Minister Ivica Dacic on August 16 addressed a session of the UN Security Council dedicated to the UN secretary-general's report on the work of the UN mission in Kosovo and Metohija, UNMIK. 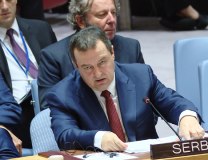