The West is now hoisted on its own petard. Disregarding the danger presented by the flawed Dayton Agreement, it came to believe that Bosnia could be managed through the same sort of incentives that have brought many of the countries of Central and Eastern Europe into the EU and NATO.

There are some attractive similarities: warring ethnic groups bitterly divided, religious issues, mindless and endless violence to name some of the key ones. Why not create three entities and a weak central government along Bosnian lines?

Leaving aside the fact that the International Community does not have nearly the amount of leverage and pressure needed to successfully force the parties in Iraq to accept such an agreement, there is an additional significant problem. Namely, it doesn't provide a lasting, viable solution. More than eleven years after the Dayton Peace Agreement was signed, the three ethnic groups in Bosnia cling to the same goals, objectives, and views of the other groups as they had when the war initially began in earnest.

In fact, one could well argue that the trauma of the war on all sides has hardened those attitudes even further. The reality is that 99% of the Serbs living in the Republika Srpska feel themselves a part of that entity and not of Bosnia. The Croats consider themselves Croats first and foremost.

Tito's Communist Party in the former Yugoslavia strongly forbid any expressions of nationalism and harshly dealt with those who tried to move in that direction (such as the Croatian Spring). Similarly, the Office of the High Representative (OHR) and the International Community have dealt harshly with any Bosnian politician who dared to use "anti-Dayton" language or question the underlying agreement.

Countless elected officials, mostly from the Republika Srpska were summarily and arbitrarily thrown out of their positions for such stances. The heresy of speaking contrary to the Dayton Agreement seems to be roughly equivalent to questioning the Koran in the Middle East.

The fact is that both Tito and the High Representative through intimidation could suppress opinions, but could not eradicate them. In fact, by driving those views underground, one could argue that it only strengthened them. Fueled in large part by the Kosovo question and its nationalist impact in Serbia, the Bosnian Serbs led by Prime Minister Dodik are now more openly making the case for a Referendum on Status in the Republika Srpska.

Meanwhile, Bosniaks are just as openly calling for the abolishment of the RS altogether. Constitutional reform is less likely now than even one year ago, as is police reform in the manner desired by the International Community.

For the past eleven years, most of the representatives of the International Community located in Bosnia have chosen to see the country through rose-colored glasses. They have focused on some undeniable successes (absence of violence, freedom of movement, restoration of property rights), while ignoring the major flaws in the underlying system. In so doing, they have consciously or unconsciously misled their governments about the true situation on the ground.

The problem is the Dayton Agreement itself. It has put in place an unworkable system that emphasizes ethnicity and not individuality.  Paddy Ashdown recognized that it was unworkable and pushed the edge (and even went beyond it) in modifying Dayton to give Central government more authority. But he was uniformly disliked by the Bosnians - one of the few things on which all seemed to agree.

The West is now hoisted on its own petard. Disregarding the danger presented by the flawed Dayton Agreement, it came to believe that Bosnia could be managed through the same sort of incentives that have brought many of the countries of Central and Eastern Europe into the EU and NATO. This was hastened by the U.S. desire to turn over responsibility for the region as quickly as possible to the EU.

Consequently, a European Union force called EUFOR replaced SFOR. Plans were made for the Office of the High Representative to close this summer and be replaced by a smaller European Union-led office with diminished powers and responsibilities. Significantly, this office would not have the so-called Bonn Powers, which permitted the High Representative to sack uncooperative elected officials and to issue numerous decrees in place of action by the Bosnian government.

This plan is now in jeopardy. The International Community (reflecting the politics of appointments made by international organizations at its worst) installed as the "last" High Representative a decent man named Christian Schwartz-Schilling, whose heart was in the right place, but who was simply too old to do the job.

Moreover, seeing the degree of hatred for his predecessor (and having been cautioned by many Europeans to be careful in any use of the "Bonn Powers"), Schwartz-Schilling deliberately took the opposite approach. So the Office of the High Representative went from having its most pro-active, aggressive head to its most passive. Schwartz-Schilling literally slept through his time at the helm. It is the general consensus that Bosnia actually went backward in many ways during his mandate.

The West is also belatedly recognizing that events in the Balkans are linked and consequently what happens in Kosovo can have a major impact in Bosnia as well. So well after the planning was complete and the actual transition underway to the EU leadership in Bosnia, the United States in particular - but other key nations as well - got cold feet. They are now in the position best described in an old song by Jimmy Durante: "Did you ever have the feeling that you wanted to go and still have the feeling you wanted to stay?"

The United States does want to go and it does want to leave this problem to the European Union. At the same time, it now fears that a premature departure by the Office of the High Representative will make it much more difficult to deal with a Bosnia grown restive from developments in Kosovo.

The first step has been taken. If Schwartz-Schilling would simply have left well-enough alone, he may well have been permitted to finish out his mandate and depart in June as the last High Representative. But ironically, his very success while lobbying in Western capitals to have his mandate extended because of the serious problems still confronting Bosnia convinced virtually everybody, including the Germans who originally proposed and supported him that the mandate probably did need extended, but that a stronger, more pro-active personality was needed as High Representative.

But what happens now? There are several outstanding questions. The first is whether the mandate of the Office of the High Representative will actually be extended past this summer and if so, for how long. The second is whether there will be full agreement with the European Union that the OHR has pre-eminence in Bosnia and its own EU Mission will not be engaging in turf battles with it. The third is how large will the OHR Mission remain and what exact functions will it have. And the final question is who will be the new High Representative.

With regard to the last question, there is serious consideration being given to having it be an American. The reasoning is that the EU will have its own Mission already up and running in any case. Secondly, the Mission of the OHR can be narrowed to focus on a few vital issues, mainly dealing with the Dayton Agreement. Thirdly, it has been the United States that has led the charge for extension of the Mandate.

This almost certainly will not end well. Because the challenge is not to implement Dayton, but to change it. That will have deadly serious opposition from within Bosnia, as we have already seen. To have even a chance of so doing would require the full and total support of a unified Peace Implementation Council Steering Board and heavy lifting by senior officials of key countries.

That will require a High Representative with sufficient personal gravitas to exercise power, persuade the three parties of the requirement to take difficult steps, and to persuade a reluctant European Union to be prepared to fully utilize the Bonn Powers when necessary. Unless we are prepared to do all the above, it isn't worth attempting.

In fact, it will be counter-productive, as it could seriously exacerbate an already difficult situation. Attention now is primarily focused on the evolving Kosovo drama, but it would be a mistake to underestimate the significance of the Bosnian situation for stability in the region during this critical year. 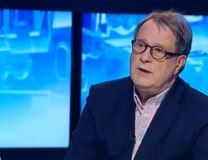