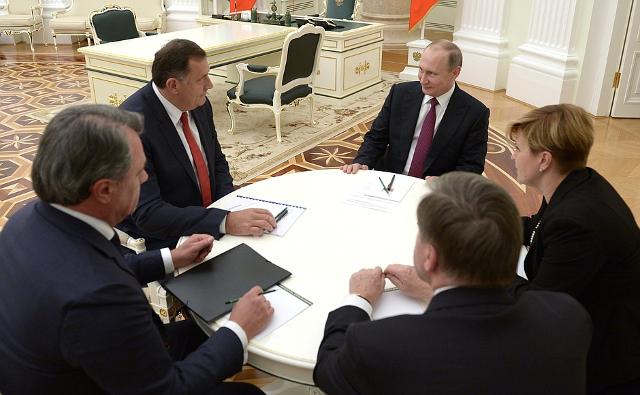 "As far as referendum is concerned, there was no special discussion, except the conclusion that it is the right of the people," Dodik told Sputnik after the meeting. He said that RS citizens who live in Russia will have a chance to vote in Moscow and in several other polling stations around the country.

Asked whether Serbia's position on the referendum was also discussed in the Kremlin, Dodik said it was not, and stressed that economic cooperation was the focus of the meeting.

Sputnik is reporting that Putin and Dodik concluded that political and economic cooperation between the two countries was good. "We mutually expressed our satisfaction that the project to privatize the RS oil industry has been successful. We ascertained that profit is being made and that in this respect, the situation is moving in the best possible direction." Dodik added.

He also said that the RS intends to open its representative office in St. Petersburg and in that way strengthen its economic presence in the Russian Federation.

Another topic of conversation was "the scourge of the modern world, terrorism."

"The RS police have good cooperation with the Russian police, and in that respect a project for joint training and acquisition of police equipment was agreed earlier," the RS president said.

He stressed that his conversation with Putin also concerned the need to maintain stability and peace in the Balkans, above all in Bosnia-Herzegovina. "And in that respect the contribution of the Russian Federation is undeniable," Dodik added.

He also thanked Russia for being prepared "under these circumstances" to settle its clearing debt, which will bring more than USD 40 million to the RS, and will "significantly stabilize our finances and secure our liquidity for this year."