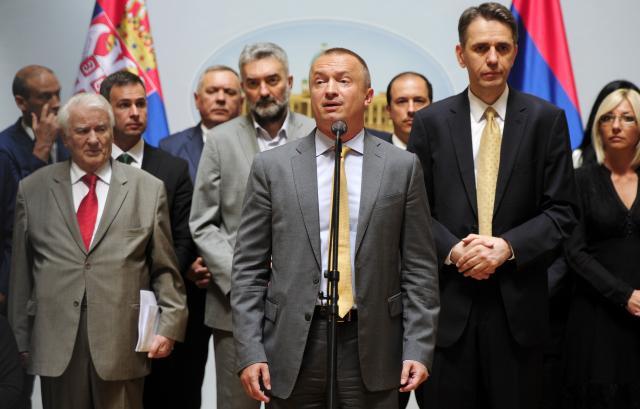 They also said that today's session should have been scheduled in line with the assembly's rules, i.e., one week, instead of 24 hours ahead, and noted that the formation of a government has been awaited for longer than three and a half months.

DS leader Bojan Pajtic said Serbia has been waiting for a new government for three and a half months, and had "no foreign investments or a good agrarian policy" during that time.

"Serbian citizens are paying for one man's taste for ruling alone," said Pajtic.

He said the DS and other parties "that fought together against election theft in April" will not accept to play merely "a decorative" role in what he said was the humiliation of Serbia.

SDS representative Marko Djurisic said the party's representatives left the session today in order to preserve the dignity of parliament.

According to him, "today's goings on are additionally rendering Serbia's politics devoid of meaning." Djurisic also accused the ruling majority of "thinking they can do as they please."

He said the first 70 pages of PM-designate Aleksandar Vucic's presentation to parliament about his new government contained "not a single word about fighting poverty," while "mentioning health care on one page only."

Enough is Enough (DJB) leader Sasa Radulovic said that "humiliation of both the Assembly and of citizens occurred today" and that this was the reason deputies from him movement left the session.

Radulovic said DJB's representatives "will not allow parliamentary rules to be violated on this, or on any other occasion."

Deputies from the ranks of DJB and the SDS said they would follow Vucic's address to the Assembly from their parliamentary clubs, and present their objections later.