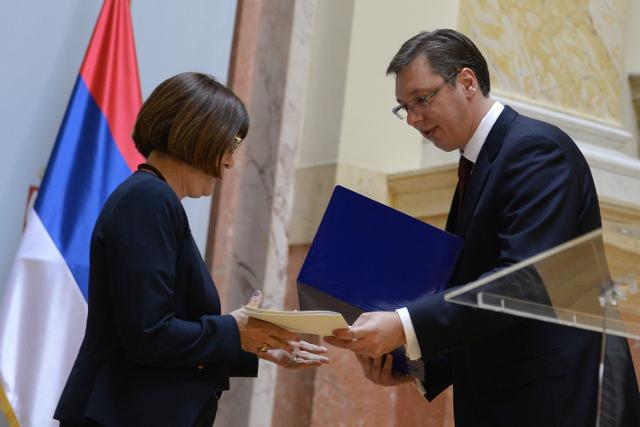 She thanked PM-designate Aleksandar Vucic, who earlier in the day submitted the names of his future ministers, adding she was convinced the new government would be elected "by the end of the week."

Vucic, who has been at the helm of Serbia's government since 2014, then spoke to reporters to say that "a dedicated group of people who are behind the (government's) program will their hearts is needed to continue."

"I have submitted the list of ministers, in line with the decisions made by political parties. There are many people who do not belong to parties. A combination of success, experience, and freshness," he said, noting that the cabinet will be officially presented in the Assembly on Tuesday.

"We have preserved the backbone of a government that prevented bankruptcy, raised growth almost threefold... to arrange public finances, to carry out a full stabilization... like in the best companies, fresh blood is needed," Vucic said.

In addition, new ministers without portfolio will be Slavica Djukic-Dejanovic (SPS) and Milan Krkobabic (PUPS).

The government will continue to be headed by Aleksandar Vucic, with Ivica Dacic keeping his job as Vucic's first deputy and Serbia's foreign minister.