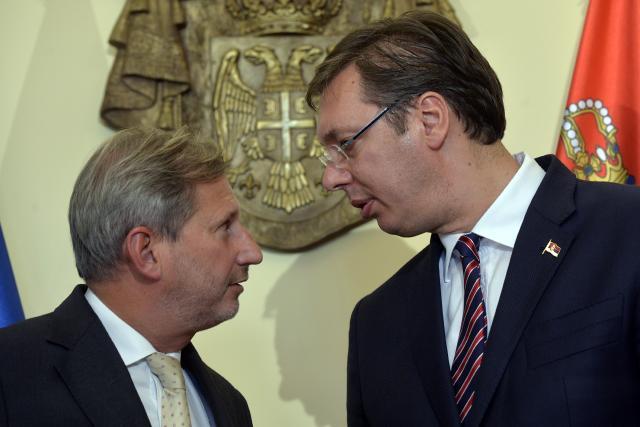 This process, said Hahn, serves to implement joint projects in the region, and to achieve the important goal of reconciliation.

According to him, "Serbia in many areas can provide an impulse to the whole region."

"However, one cannot ignore the emotional state of the population. In Skopje, we must approach the resolution of the issue of Macedonia's name, which we will do. Even in Bosnia-Herzegovina things are progressing. The dynamic is fine," said Hahn.

Asked whether there was a risk, due to the current crisis, for the EU "to lose the Balkan countries" - because nobody wants to take on new members, the EU commissioner said there were concerns among candidate countries following the British referendum.

He recalled that a summit on the Western Balkans was held in early July, "where precisely this was the central topic."

"The countries of the Western Balkans are strategically important for the EU, so at the end of the day, they will have to become members. The accession perspective was once again underlined at the summit," said Hahn.

He added that "his art" will be in "maintaining a balance between the charm and the demands."

"There one needs to be specific. We opened last week two important chapters with Serbia, it was an important breakthrough. On Thursday, we launched the most comprehensive so far reforms of the judiciary with Albania. In Macedonia, there has been very important progress in the implementation of the agreement from Przino, which should take the country out of the political crisis. We have a good week behind us, for me, and for the enlargement," Hahn has been quoted as saying.

Asked whether too little attention had been paid in the past in EU's enlargement process to the rule of law and corruption, the EU commissioner said he "does not want to criticize his predecessors," and that "every good has its own special problems."

"In 2004 we had exceptional mood in favor of EU's expansion, because that was seen as the last hurdle in the developments since 1989. At the same time, this was based on an economic boom phase. When it comes to the rule of law, bringing different cultures of countries together was left out. It was thought most likely that this would be resolved by itself. For that reason, the methodology has changed. We now begin and end negotiations with the rule of law chapters," said he.

When asked about his goals by the end of his current mandate, Hahn said, "there are general, and specific objectives":

"In general I have achieved that economic development gets the same importance as the rule of law. In all of Europe today we have enlargement fatigue and that should not be sugarcoated, especially because the general opinion is that each new member is a new financial burden for others."

He stressed that all countries of the Eastern bloc, the former Yugoslavia, "have not been efficient - while their industry was often dependent on raw materials and relied on heavy industry."

These countries, he said, "must be put on a broader basis, and this must be pushed, while it is also necessary to attract investors."

"However, small and medium enterprises come to a country only if the rule of law works, if it is possible to rely on local courts. This transition we must organize - the construction of economic development, which must go hand in hand with developing the rule of law. I have undertaken to strongly connect basic political and economic values. I hope that this is an irreversible process," Hahn concluded.

Speaking about the refugee crisis, Hahn pointed out that the directly affected countries, such as Serbia and Macedonia, have behaved in an "exemplary cooperative manner."

"I do not want Balkan countries to which I pay special attention to become a parking lot, from which refugees can neither move forward nor go back," said Hahn.