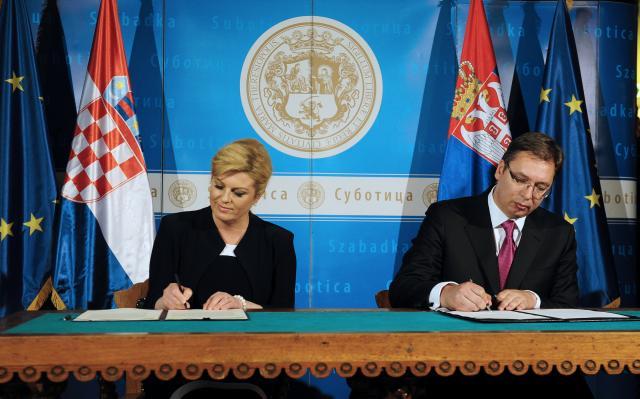 Under Point 1 of the declaration, the two countries shall actively initiate or accelerate processes aimed at enhancing bilateral protection of minorities - Serbs in Croatia and Croats in Serbia - based on existing agreements.

Point 2 stipulates an immediate start of negotiations between state commissions to define the border line between Serbia and Croatia pursuant to international law.

The two countries have no territorial demands and, in case bilateral talks fail after a reasonable period of time, they are prepared to take the territorial dispute to international judicial institutions, the document also said.

Point 3 states that Serbia and Croatia are prepared to accelerate the implementation of a succession agreement signed in Vienna on June 29, 2001.

The declaration affirms that both countries agree that the search for missing persons is a priority humanitarian issue and that honest and maximum efforts will be made to find them.

The two countries also pledged to work actively and in a coordinated manner in the fight against terrorism and the migrant crisis.

Earlier in the day, Vucic and Grabar Kitarovic first met on a bridge on the Danube on the Bogojevo-Erdut border crossing, and then visited the birth house of Milutin Milankovic in Dalj, where they together unveiled a bust of the Serb mathematician and astronomer born in Austria-Hungary, present-day Croatia.

In Milankovic's home, they were welcomed by Milorad Pupovac, an ethnic Serb MP in the Croatian parliament, and the meeting was also attended by Serbian Foreign Minister Ivica Dacic.

Afterwards, Vucic and Grabar Kitarovic traveled to Serbia and visited Donji Tavankut, a village near Subotica, northern Serbia, that has a majority ethnic Croat and Bunjevac population. Welcomed with applause by the locals, they visited a naive art gallery and attended performances organized by cultural associations.

This was be the first visit of Grabar Kitarovic to Serbia - and was not an official, but a working visit. It was also her third meeting with Vucic since she took office in February 2015.

Croatian agency Hina said ahead of the meeting today that both sides wish to "draw the line and move forward in relations between the two countries."

The declaration, as stated, concerns minority issues, and those related to missing persons, borders and succession.

Citing sources from Zagreb, Hina reported that the meeting represents "a strong expression of the political will, that was agreed on in direct communication between the two cabinets, without any intermediary activity of any party."

"The fact that the declaration will be signed by the president of one country and the prime minister of another stems from the fact it was concluded that Vucic is the real leader on the Serbian side who has the power to finally start addressing the specific problems," said the agency.

Ahead of his trip to Croatia today, Vucic spoke for that country's state broadcaster HRT to say the signing of the declaration will be "the first step in the thawing relations between Croatia and Serbia".

"I think we have achieved a great result. The agreement deals with essential, serious, strategic issues for Serbia and Croatia. We should try to talk more with each other, show greater respect for each other," said Vucic.

At the same time, Grabar Kitarovic spoke for Serbia's state broadcaster RTS to say there was "a genuine willingness on both sides to move forward in resolving outstanding issues" and that she and Vucic "want their meeting to be truly historic."