SRS party leader Vojislav Seselj on Thursday arrived in front of the Higher Court in Belgrade although his hearing scheduled for today had been postponed.

SRS party leader Vojislav Seselj on Thursday arrived in front of the Higher Court in Belgrade although his hearing scheduled for today had been postponed. 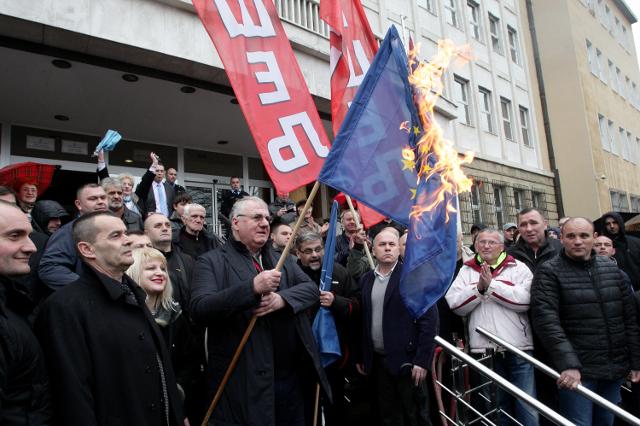 Seselj was to be questioned over the Hague Tribunal's demand to Serbia to extradite him to this institution, that will on March 31 announce the first-degree verdict in his war crimes trial.

However, the Belgrade court canceled Seselj's hearing scheduled for Thursday for procedural reasons, while a spokesman said earlier in the day that he was informed about this on Wednesday afternoon.

Seselj told reporters that the hearing was questioned because the trial chamber of the ICTY (Hague Tribunal) failed to send answers to Serbia's questions related to certain procedural issues.

The SRS leader stressed he "cannot wait for the hearing to be scheduled again so he could explain for what legal reasons he cannot be extradited to the Hague Tribunal."

He believes that Serbia is "no longer independent" after the signing of an agreement with NATO, and that he set the flags on fire in protest.

The police had increased their presence around the court building today.