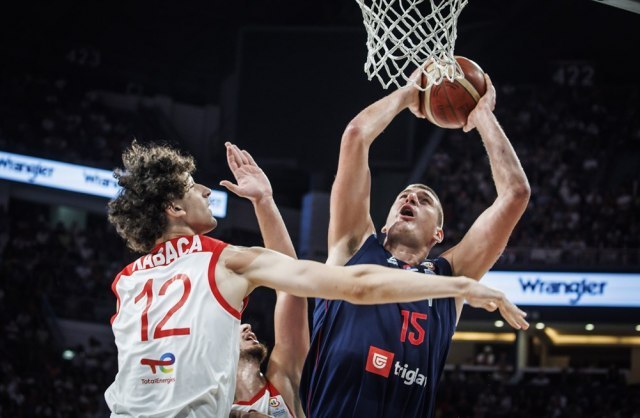 Serbia now has an identical score of 3/3 with Belgium (defeated by Greece) in the third position and placement at Mundobasket has never been more realistic for Svetislav Pešić's team.

Nikola Jokic opened the match brilliantly, and once again led Serbia to victory and it only took him a little more than half of the first quarter to reach double figures.

The two-time MVP of the NBA was also the most effective player with 24 points (10/16 from the field) with 10 rebounds. He was followed by Marko Gudurić and Nikola Kalinic with 14 points each, while Vladimir Lučić also scored in double figures with 11 points.

On the other side, Cedi Osman stood out with 22 points and six rebounds, Furkan Korkmaz scored 18, while Alperen Şengün finished the match with 17 points.

Both teams now turn to the European Championship, where Turkey plays Montenegro on September 1st, while Serbia has a match against the Netherlands a day later.

Nikola Kalinic with the @TISSOT Buzzer Beater from INSIDE HIS OWN HALF! 🤯#FIBAWC | #WinForSrbija 🇷🇸 pic.twitter.com/ZdVJjWOqKv

Djokovic with Serbia in Istanbul

Novak Djokovic won't play at the upcoming US Open, but that's why he doesn't miss other big sports events.

As an unvaccinated individual, he does not have the right to enter the United States, but in Turkey, such rules do not apply.

As you can see, Novak Djokovic has arrived in Istanbul at Sinan Erdem Dom and is supporting the Serbian basketball team.

Pešić: This is a recipe for Eurobasket

Serbia's coach Svetislav Pešić was satisfied after the triumph over Turkey in Istanbul with the score of 79:72.

Serbia now has a score of 3/3 and is ranked third, surpassing Turkey in a direct clash, making the placement at Mundobasket very realistic for Svetislav Pešić's team.