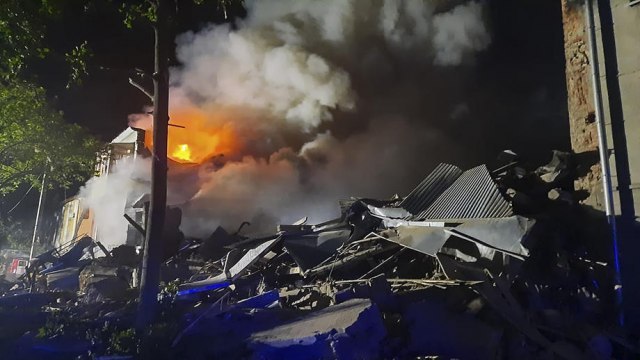 After the detonation of ammunition in a warehouse in Dzhankoi in the north of Crimea, a regional emergency regime was introduced. Fighting is also taking place throughout the Donbass.

United Nations Secretary General Antonio Guterres will travel to the Ukrainian city of Lviv on Thursday, where he will meet with Ukrainian President Volodymyr Zelensky and Turkish President Recep Tayyip Erdogan, the UN spokesman announced.

Estonia will this week close its borders to more than 50.000 Russians who have been previously issued visas, becoming the first country in the European Union to implement measures aimed at making it harder for Russians to enter the EU.

An attack on a nuclear power plant

Russian media reported that Ukrainian forces fired six missiles that hit the area next to the Zaporozhye nuclear power plant. They also state that the rockets did not hit the power plant.

"The Russians must withdraw"

Ukrainian President Volodymyr Zelensky said in a new address that the Russian army "must withdraw from the territory of the nuclear plant and all neighboring areas and remove its military equipment from the plant".

"It must happen without any conditions and as soon as possible," he said. In his speech, Zelensky referred to the current situation on the front lines in the regions of Donetsk and Kharkiv, saying that the heaviest fighting is currently taking place in the areas of Avdivka, Bakhmut and Kharkiv.

The Ukrainian army admitted today that Russian forces advanced on some parts of the front west of the city of Donetsk.

NATO Secretary General Jens Stoltenberg said today that it is crucial to ensure the conditions for representatives of the International Atomic Energy Agency (IAEA) to visit the Zaporozhye nuclear power plant in Ukraine and called on Russia to withdraw its troops from that facility.

"It is urgently necessary to allow the inspection by the International Atomic Energy Agency to take place and guarantee the withdrawal of all Russian forces," Stoltenberg told reporters in Brussels. He pointed out that the fact that Russian military forces occupied the Zaporizhia nuclear power plant represents a serious threat to the safety and protection of that facility. "It increases the risk of a possible nuclear accident or incident and endangers the population of Ukraine, neighboring countries and the international community," added Stoltenberg.

The United Nations has the logistical and security capacities to support the visit of IAEA inspectors to the Ukrainian nuclear power plant Zaporozhye, and the condition is that both Russia and Ukraine agree to it, UN spokesman Stefan Dizarik said earlier. He thus responded to Russia's accusation that the UN blocked the visit of IAEA inspectors to the largest nuclear power plant in Europe, which Russia shut down in March.

Consequences of shelling in Mykolaiv

Thankfully another quiet night. It's unlikely to be a coincidence that it came after #Ukraine's successful strikes on bases in #Crimea.

Both sides continue to suffer heavy losses at the front but logistics are becoming a big problem now for #Russia.