Body language gave them away: Data that will make Europe infuriated

The momentum of trade relations between Turkey and Russia is much more than mutual political sympathies.

Body language gave them away: Data that will make Europe infuriated

The momentum of trade relations between Turkey and Russia is much more than mutual political sympathies. 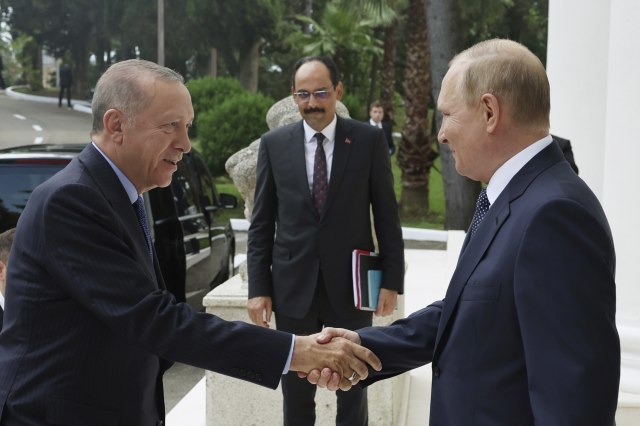 The photographs of the recent cordial meeting between Turkish President Recep Tayyip Erdogan and Vladimir Putin in Sochi reveal in themselves that there is a high level of understanding between the two autocrats.

Although Turkey is supposedly an important member of NATO that protested against joining the Scandinavian countries, after the start of the invasion on Ukraine, the Turkish economy is one of those that enable Russia to survive international isolation.

From March to July alone, Turkish exports to Russia amounted to 2.04 billion dollars of goods and services, which is 624 million more than in the same months of 2021. Such an increase suggests that Turkey does not care about official sanctions, let alone that its companies are willing to give up business in Russia on moral grounds, as many companies based in liberal, western democracies have done.

Turkey has a rich international exchange with a number of countries, but last month, nowhere else did exports grow as strongly as to Russia. In the overall structure of Turkish exports, the one to Russia thus reached a significant 3.9 percent in a short period of time, which is an impressive result if you know that after the beginning of the Russian military operation in Ukraine, initially the trade between the two countries practically stopped. Data from the Turkish Export Assembly reveal that various chemicals, fresh fruit, textiles, electrical appliances and furniture are mostly exported to Russia.

At a four-hour meeting in Sochi, the two leaders agreed on the development of cooperation in energy and trade in general, which was, to put it simply, a red light that turned on in the offices of the heads of government of Western democracies who are trying to impair Putin's economic regime.

Basically, Erdogan is acting opportunistically because Turkey supplied armed drones to Ukraine, which attracted public attention, and at the same time worked on developing economic relations with Russia.

The strengthening of economic ties between Turkey and Russia is a particularly sensitive issue for the European Union because Turkish companies are using the opportunity to start developing trade relations with Russia that were previously dominated by individual EU members.

The tension between individual EU members and Erdogan's government has grown so much that some countries have officially asked Ankara to declare the essence of relations with Putin's regime.

Given that Erdogan particularly insists on conducting a stimulating monetary policy, his country has problems with inflation and devaluation. This year alone, the Turkish lira has weakened by a quarter of its value against the dollar, which makes Turkish products very attractive to Russian importers. But, even with the weak lira and the ruble, which have strengthened considerably, there is a 25 percent increase in total trade volumes in July compared to the same month last year.

Some Turkish officials openly celebrate the flourishing of economic relations with Russia. For example, the Minister of Trade of Turkey, Adil Karaismailoğlu, published a tweet in which he praised the 58 percent growth of the Turkish automobile industry's trade with Russia in the last three months. He emphasized Turkey's leadership in opening sea corridors to the Russians.

Although the anger of decision-makers is simmering in several European capitals, there will most likely be no particular changes in the treatment of Turkey because Erdogan's regime has positioned itself as an important factor in geopolitical stability - apart from being a member of the NATO alliance, it should not be forgotten that Turkey holds around four million Syrian refugees, which is a migrant wave that Europe is not ready to accept.