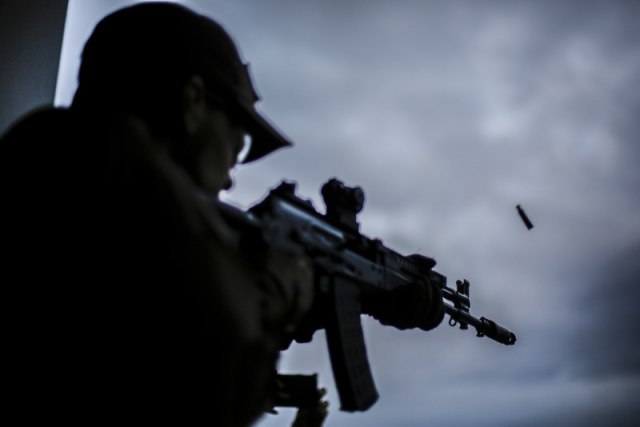 Staff at the occupied Zaporizhzhia nuclear power plant have described to the BBC being kept at gunpoint while Russian troops use it as a military base.

Moscow has also recently been accused of using the plant "as a shield" while its troops launch rockets from there towards nearby locations.

However, according to the governor of Dnipropetrovsk, the Russians fired more than 120 rockets at the city of Nikopol, which is separated from Zaporizhzhia only by the Dnieper River. Some shells fell near the spent nuclear fuel storage facility, which houses 174 containers of highly radioactive material, and the UN nuclear watchdog said there was a "real risk of a nuclear catastrophe" unless the fighting stops and inspectors are allowed access.

Ukraine and Russia have been blaming each other of causing a nuclear disaster for days. The picture is murky, but the risks are crystal clear, warns the BBC.

The nuclear plant worker therefore told the BBC his side of the story. About the threats they experience every day, more and more frequent random kidnappings, as well as their own fears of potential "radioactive contamination of the wider region" or a nuclear disaster... Svitlana and Mykola are the code names of BBC sources, to protect them from very likely Russian retaliation.

"My working day is a constant stress," says Svitlana, who's contacting BBC reporters via text message.

She and her fellow worker Mykola can only use Russian SIM cards now and signal is very limited. We're not using their real names for their safety.

"I can't work like I used to. Last week I haven't even been able to come to my workplace - it's dangerous. On Saturday, there was shelling of the nitrogen-oxygen station, which caused a fire. By some miracle, the people working there survived", Svitlana said.

Another Enerhodar resident, where the Zaporizhzhia plant is located, tells BBC that shop and pharmacy prices are now four times higher than in territory that Ukraine still controls, as well as there being a shortage of doctors. Most ATMs are closed, too.

"The psychological situation is difficult," she adds. "Soldiers are walking everywhere with weapons and everyone is actually kept at gunpoint", Svitlana says. Russia is accused of placing 500 soldiers in the nuclear base, and Svitlana also confirms that the Russians are using it as a military base. "Every day they drive back and forth in their military vehicles," she says.

"The staff are now hostages of the Russians. They turned off the internet, left only landline phones, and food is available only in one single dining room. They turned the others into their bases", her colleague Mykola says via text message.

Mykola continues: "Access to all roofs is prohibited, they made their observation points there. The training building also became their barracks. Now, more and more often, staff are kidnapped just when leaving the shift at the security gate". It is not known why the kidnapping takes place - but residents believe it is a Russian method of intimidation.

Svitlana and Mykola also describe rubbish being left everywhere by the Russians - but they say staff are still able to monitor the reactor properly.

Is there a risk?

IAEA experts have made a preliminary assessment that there is no "imminent threat" to the plant's safety from shelling or other military action, IAEA member Rafael Grossi told a UN Security Council meeting in New York on Thursday.

"However, that could change at any time," Grossi said. Grossi called on Moscow and Kyiv to allow international experts access to the facility as soon as possible. "I am personally ready to lead such a mission," he said.

Just hours before the meeting called at Russia's request, the Zaporizhzhia power plant in southern Ukraine - the largest in Europe and among the largest in the world - was attacked with heavy artillery, an official of the Russian occupation administration in Ukraine said.

Reuters could not independently verify that information.