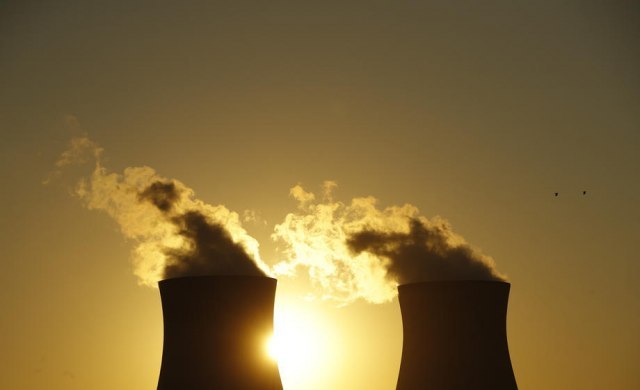 The video shows a cloud of smoke coming from the direction of the power plant, according to eyewitnesses.

Reuters writes that the Secretary General of the United Nations, Antonio Guterres, therefore proposed that the power plant in Zaporizhzhia declare part of the area around it a demilitarized zone.

Energoatom, the Ukrainian agency that manages the country's four nuclear power plants, said on Thursday that the Zaporizhzhia nuclear power plant had been attacked five times and that some of the rockets had landed near rooms where radioactive waste is stored.

The Russian news agency TASS reports that officials appointed by Russia said that Ukraine fired two missiles at the power plant and interfered with the handover of the shift.

On Thursday, Guterres called on both countries for all military activities in the immediate vicinity of the plant to cease immediately and not to target its facilities or surroundings.

"I urge the withdrawal of any military personnel and equipment from the plant and the avoidance of any further deployment of forces or equipment to the site. The facility must not be used as part of any military operation. Instead, urgent agreement is needed at a technical level on a safe perimeter of demilitarization to ensure the safety of the area", said the UN Secretary General.

In March, Russia seized the power plant in Zaporizhzhia. Russian forces still hold it, and Ukrainian experts work there. The United States supported a proposal to declare the area around the plant a demilitarized zone and for International Atomic Energy Agency (IAEA) officials to visit the nuclear plant.

"The United Nations continues to fully support the critical work of the International Atomic Energy Agency (IAEA) and its efforts to ensure the safe operations of the Zaporizhzhia Nuclear Plant. I urge the parties to provide the IAEA mission with immediate, secure and unfettered access to the site".

"We must be clear that any potential damage to Zaporizhzhia or any other nuclear facilities in Ukraine, or anywhere else, could lead to catastrophic consequences not only for the immediate vicinity, but for the region and beyond. This is wholly unacceptable", Guterres concluded.

Vasily Nebenzya, the Russian envoy to the United Nations, said that the world is "threatened by a Chernobyl-like nuclear disaster" and that IAEA officials could come to the Zaporozhye power plant during August. Ukrainian President Volodymyr Zelensky demands that Russia hand over the power plant to Ukraine.

"The nuclear security of Europe can only be achieved by the complete withdrawal of Russian forces from the Zaporozhye facility and their return to Ukraine," Zelensky said. The Ministry of Foreign Affairs of the Republic of France announced that the behavior of the Russians increases the risk of an accident with potentially catastrophic consequences.

Kiev accuses Moscow of positioning its forces around the factory so that Ukrainian forces could not attack them. Moscow, on the other hand, accuses Kiev of rocketing the power plant.

Russians are committing a dangerous provocation near Zaporizhzhia NPP at the moment.

They simulate the battles with Ukrainian forces but direct all their ammunition towards the nuclear power plant to accuse Ukrainians. #russiacausesnucleardisaster #RussiaIsATerroristState pic.twitter.com/pkbRV5F6ML

Ukraine is preparing for a tragedy

Earlier, Ukraine's interior minister said that Ukraine must be prepared for any scenario regarding the Russian-controlled Zaporizhzhia nuclear power plant, which has been shelled and people evacuated from its surroundings.

Ukrainian and Russian officials blamed each other for a new round of shelling of a nuclear power plant, Europe's largest, located in southern Ukraine on Thursday. "As of today, the power plant is not only in the hands of the enemy, but also in the hands of uneducated experts who can potentially allow a tragedy to happen," Interior Minister Denys Monastyrsky said in an interview with Reuters.

"Of course, it is difficult to imagine the level of tragedy that will occur if the Russians continue their activities here," he said. In recent days, Ukraine has warned of a Chernobyl-type nuclear disaster.

"This means for us that we have to prepare for every scenario. State emergency services together with the Ministry of the Interior and the Ministry of Regions are discussing the different scenarios that are needed, including the issue of evacuation," said Monastyrsky.