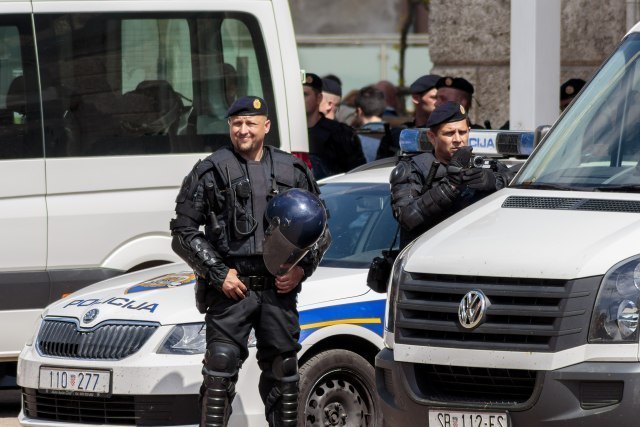 Serbian basketball player was at the center of the incident in Croatia: They told us that we were Chetniks and that they would kill us in front of the children.

The Šibenik-Knin Police Department launched an investigation into the incident that happened on Monday evening, when their active 53-year-old member took part in it, as well as several other persons, among whom is the basketball player from Borac Čačak, Sava Lešić, who was accused of "an assault with a hammer".

The Croatian "Jutarnji list" published a story about a conflict that took on an international context between Serbs and Croats, because Lešić, his brother and father were detained after a conflict with several Croatian citizens. It all started from a traffic incident that eventually led to unwanted connotations.

The Lešićs allegedly clashed with the daughters of a police officer - one is 13, the other 26 - because of car overtaking, during which someone from a white Audi with Belgrade license plates showed three fingers, to which they were shown the middle finger from another car.

After that, they left the scene, and the sisters then told their father, the policeman, what happened to them. On Monday evening, the girl's father went with his son to Strmica, where they found a white Audi in front of the house.

The source of "Jutarnji" claims that the girl's father did not show his police badge at any time and that he was immediately hit in the back with a baton, while his 27-year-old son, who is a military officer, was hit in the back of the head with a hammer by one of the brothers, who after falling to the ground from the blow, was additionally punched by that man and broke his nose.

In the meantime, the police were informed about everything and they found and detained the two Lešić brothers, but they were allegedly released from the Knin police station on Monday evening.

Everything happened in front of the children

Lešić revealed his version of the story in an interview with Sportal. "Before entering the village of Kosovo near Knin, I wanted to go around a car with German registrations, which did not allow me to go around it and was moving into my lane.

At that moment, a vehicle was coming from the opposite direction, where a few seconds divided me and my family from a catastrophic accident," claims Lešić.

"However, insults started immediately on a national basis where she said that we were Chetniks and that she was sick of us. The wife got out of the car, a 13-year-old girl jumped on her and started to tear her apart. I separated them, we got into the car, headed towards our village and noticed that this vehicle was following me and taking pictures of the car constantly.

When we arrived home after about 30 minutes, two cars came and two men got out, one middle-aged and one younger. Then they started looking for car in the yard and when the younger one saw my car, he started shouting: "That's the one, that's the one", and the older one: "You killed my mother in 1995. Now I'm going to kill you all and he started to hit my brother," says Lešić.

The police issued a statement

"After that, we acted in self-defense to prevent a major incident from happening and an elderly man went to the car to pull out a chain with a metal object and first hit my mother, and then went towards me where I tried to defend myself by running away. They chased me, then he fell, which I used to disarm him, and then the younger appeared and attacked me, but my brother and I repelled that attack, where the younger retreated immediately, and the older continued with threats. From that moment on, we tried for them to leave as soon as possible and for the situation to end because all the children of my brother and myself were on the terrace, screaming, crying and it was very stressful for all of us to watch. Fortunately, they went home, we reported the case to the police," concluded Sava Lešić.

In the meantime, the Croatian police also spoke up. The press release states that Dragan Lešić, Sava's brother, has been criminally charged for causing serious bodily injury to a military person, the wife of a basketball player for causing minor bodily injury to a 13-year-old girl from Knin, and the Lešić family's father for threatening with a gun.

The criminal complaint was also filed against the policeman from Knin who threatened the Lešić family after the traffic incident, and the police suspended him until further notice. Sava Lešić was only reported as a misdemeanor for disturbing public order and peace.

The police claim that after that there was a verbal conflict, after which the son of the Knin police officer was injured.