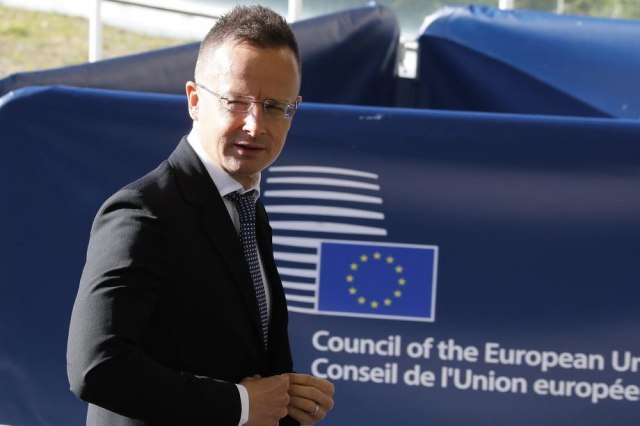 Minister of Foreign Affairs and Trade of Hungary, Peter Szijjártó, said in Banja Luka that it is "a shame for Brussels" that the European road of the Western Balkan countries has been slowed down.

He said that it is not right for Hungary that the Council of Europe has not granted BiH candidate status: "It is a Shame for Brussels that Bosnia-Herzegovina was not granted Candidate Status".

The Minister of Foreign Affairs and Trade of Hungary, Peter Szijjártó, said today after meeting with BiH Presidency member Milorad Dodik in Banja Luka that Hungarians support the stability and European integration of BiH not only with words, but also with deeds.

He reminded that there are currently 134 Hungarian soldiers in the peacekeeping forces in Bosnia and Herzegovina. The Hungarian head of diplomacy assessed that the enlargement of the EU is one of the most important policies and that the strengthening of the Union is not possible without its enlargement.

"The more of us there are, the stronger we are, and that is the most important thing for the region of the Western Balkans. Hungary is interested in the stability and peace of this region, whose immediate neighbor we are," Szijjártó said. Stating that the EU can contribute to the resolution of historical disagreements, the Hungarian official emphasized that Hungary supports dialogue, as well as that it is against the introduction of sanctions and threats to politicians in the Western Balkans.

"We supported the granting of candidate status to Ukraine and Moldova, but we believed that Georgia and Bosnia-Herzegovina should also receive candidate status, and it is a shame that this did not happen," he said.

Szijjártó stated that the Government of Hungary has launched a program for the development of entrepreneurship in the territory of the RS, stating that in September a competition will be announced for the allocation of 35 million euros for 1.400 small and medium-sized enterprises in the territory of this entity of Bosnia and Herzegovina. Companies will be able to receive maximum individual support of 25.000 euros.

The Serbian member of the BiH Presidency, Milorad Dodik, said that the cooperation of BiH and the RS with Hungary is very important, adding that he conveyed to the Hungarian foreign minister that he was disappointed by the recent decision of the European Council not to grant BiH candidate status.

Dodik assessed that the EU was unfair to Bosnia and Herzegovina, setting unrealistic 14 priorities as a condition for obtaining candidate status, while insisting on the fulfillment of questions that correspond only to politicians from Sarajevo. According to his words, the EU should have accepted Bosnia and Herzegovina as a member earlier and "model" it in the Union.

"Enthusiasm for the EU has subsided here, but we are still committed to the European path," said Dodik. He confirmed that he will travel to Brussels on Wednesday, where a new round of negotiations between leaders of political parties from BiH should be held under the auspices of the President of the European Council, Charles Michel.

"The EU should give us realistically implementable recommendations, because the centralization of BiH through the EU will not pass. If you force us to choose EU membership with centralization in BiH or the RS, we choose the RS," said Dodik.

He added that the situation in Ukraine was also discussed at the meeting and that he conveyed to Szijjártó his desire to end the conflict as soon as possible, stating that he understood the position of Hungary, which primarily took care of its national interests in relation to the Ukrainian-Russian conflict.

"And we in the RS have to act responsibly according to the expectations of our people, we have to follow those interests and we cannot impose sanctions on Russia, regardless of the expectations from the EU and the USA", emphasized Dodik.