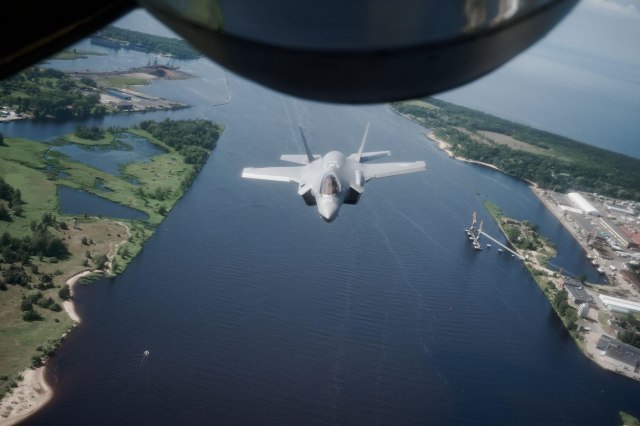 In vain, both Lithuania and the European Union tried to explain to Russia that the blockade, which includes coal, metals, construction materials and advanced technology, is not its independent decision, but the implementation of a joint EU decision on sanctions.

"The answer will not be diplomatic but practical," Maria Zakharova, a spokeswoman for the Russian Foreign Ministry, threatened on Thursday, who knows how many times since the beginning of the war in Ukraine. This time, it threatened its Russian neighbor Lithuania, and the reason is, let us remind you, the announcement of the blockade of a significant part of the railway traffic through this country, for the Russian enclave of Kaliningrad.

She did not explain what the "practical" answer was, but it is interesting that on the same day, the Ministry of Defense of another Russian neighbor, Estonia, reported that the Russian military helicopter Mi-8 entered its airspace for two minutes last Saturday.

The day before, the threat to Lithuania, which has about 50 times less inhabitants than Russia, not to mention the territory - was also sent by Nikolai Patrushev, Secretary of the Security Council of the Russian Federation and a close ally of Putin.

"Russia will certainly respond to such hostile actions. Appropriate measures are being developed in an interdepartmental format and will be taken in the near future. Their consequences will have a serious negative impact on the Lithuanian population," said Patrushev from Kaliningrad, accusing Lithuania of violating international norms and principles and rights.

On the other hand, Lithuania has a volunteer paramilitary called the Lithuanian Shooting Alliance, which was founded some hundred years ago to fight for independence, but which also has a dark episode of cooperation with the Nazis in World War II, similar to the Organization of Ukrainian Nationalists they refer to when they talk about the “denazification” of Ukraine.

After the declaration of independence, the alliance was renewed with the support of the state. Since the beginning of the war in Ukraine, the number of members has risen sharply to the current 14.000. Ramunas Sherpetauskas, commander of the local company of the Lithuanian Rifle Union and a commander of the local platoon in Druskininkai, told Politico that for now everything is peaceful on the eastern border and that he does not expect Russia to try anything with his country as long as it is occupied in Ukraine, but that he and his comrades monitor the border corridor.

"Some people think that there is no sense in attacking us, but it should be noted that this is a direct land route to Kaliningrad. If they are able to defeat Ukraine, it is possible that the next blow will fall here," Sherpetauskas believes.

Would the Germans, the French and the Americans go to war for Lithuania?

The biggest risk, however, potentially stems from relative irrelevance, at least for the rest of NATO. Would all, or at least the most important ones, NATO members, such as the United States, Great Britain, France and Germany, really be ready to enter the Third World War just because of this corridor? That could be exactly the blurry line that Putin likes to test in the West, convinced of his indecision and weakness.

"The only answer to this challenge is the increased presence of NATO here. We know how obsessed Russia is with the closure of land corridors," Lithuanian Deputy Defense Minister Margiris Abukevicius told Politico. And that will certainly be one of the issues that will be hotly debated at the upcoming NATO summit in Madrid on June 29-30, along with the issue of Ukraine, where the situation on the battlefield in Donbas is getting worse.

NATO Secretary General Jens Stoltenberg has announced that combat groups will be further strengthened in the eastern part of the alliance, with more air, naval and cyber defense, "but the last word will be on the leaders of the strongest members", starting from the U.S. President Joseph Biden onwards.