The final fall of Lugansk on the horizon; A new phase of the war begins?

Russia's new strategy in eastern Ukraine has allowed Russian forces to make slow but secure progress in the Luhansk and Donetsk regions.

The final fall of Lugansk on the horizon; A new phase of the war begins?

Russia's new strategy in eastern Ukraine has allowed Russian forces to make slow but secure progress in the Luhansk and Donetsk regions. 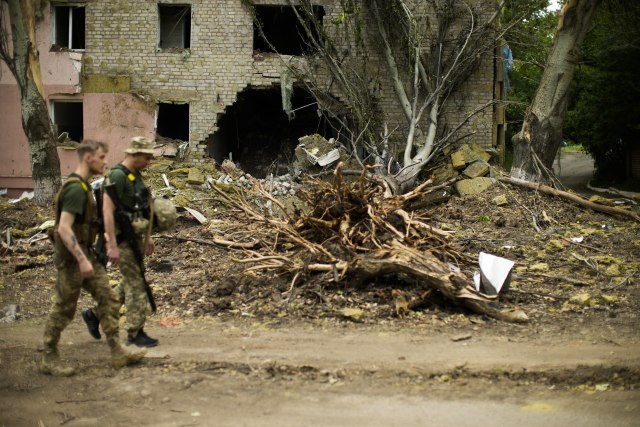 This prompted Ukrainian officials to announce the possibility of withdrawing Ukrainian defenders from Luhansk so that they would not be trapped in a hostile environment.

Lugansk Governor Serhiy Haidai said today that Russian forces had entered Sievierodonetsk - a city of about 100.000 inhabitants that is of great strategic importance to Ukrainian defenders east of it.

Today, there are only about 13.000 people left in the city, and it is estimated that about 1.500 people have died so far. The fall of Sievierodonetsk would cut off Ukrainian forces buried in defensive positions behind Luhansk, which is still under their control.

According to the Washington ISW Research Center, Russian troops launched a direct attack on Sievierodonetsk without the army being able to completely surround the city, which means that its defenders still have supply lines in the west.

Russian scouts and special forces tried to occupy the Mir Hotel and its surroundings in the northeastern part of the city. ISW notes that the Russian army has so far had serious problems in conquering urban areas and predicts that the same scenario will be repeated in this case.

"We will have enough strength and resources to defend ourselves," Haidai said in a telegram. "But we may have to withdraw so as not to end up surrounded. Governor of Luhansk also said that as much as 90 percent of the buildings in Sievierodonetsk were damaged and that as many as 14 skyscrapers were destroyed in the last shelling."

According to today's report by the British Ministry of Defense, Russian forces have most likely occupied most of the Liman, a strategically important railway hub in Donetsk, which provides access to important road and railway bridges over the Donetsk River.

"For now, Russia's main efforts are likely to be 40 kilometers east, around Sievierodonetsk, but crossing the Liman River would give Russia an advantage in the next possible phase of the Donbas offensive, when it is likely to try to advance toward key Ukrainian-controlled cities deeper in the Donetsk region: Slavyansk and Kramatorsk", it is stated in the assessment.

The withdrawal of Ukrainian forces from Luhansk and the fall of Donetsk would probably trigger the next phase of Russia's plan - the annexation of the occupied territories to Russia. The leader of the self-proclaimed Donetsk People's Republic, Denis Pushilin, announced on Thursday that a referendum would be held in Donetsk and Luhansk if Russia conquered the entire territory of the two areas.

At the diplomatic level, EU members are preparing to reach a compromise solution to ban Russian oil imports, which EU government representatives could agree on at today's meeting and confirm at a summit of heads of government scheduled for Monday and Tuesday.

As Hungary has so far blocked a plan for a full embargo on Russian oil imports, arguing that the move would be destructive to the Hungarian economy, the latest proposal focused only on an embargo that would hit Russian tankers, but ignored pipeline deliveries, which could meet Hungarian eligibility criteria. Budapest claims it needs four years and about 750 million euros to upgrade its refineries and increase its capacity to receive oil from the Adriatic pipeline.

An embargo on Russia's maritime oil transport would affect about three-quarters of Russia's exports to European countries, so European leaders estimate that the move would be a serious blow to the Russian economy. The opposition in Budapest has stopped other sanctions in the package, which could now pass.