The war in Ukraine entered its 93rd day.

The war in Ukraine entered its 93rd day. 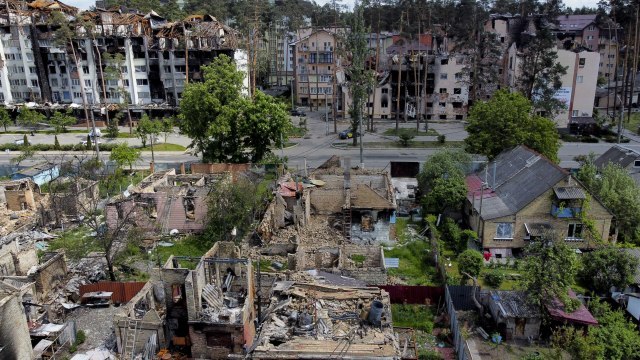 At least seven civilians were killed in a shelling of the center of Kharkov on Thursday, local Ukrainian officials said. The Russian army also attacked more than 40 cities in Donbas, the Ukrainian army claims.

The military situation in eastern Ukraine is worse than people say it is, and the country now needs heavy weapons to fight Russia effectively, Ukrainian Foreign Minister Dmitry Kuleba said.

Kuleba also said that peace talks with Russia are not actually being conducted, while his Russian counterpart Sergei Lavrov claims that Kyiv is moving away from the original concept of the agreement between Russia and Ukraine.

Rocket attacks on the Dnipropetrovsk region

"A restless night and a restless morning. We are facing with a serious destruction in several missile attacks this morning," Reznichenko wrote on the Telegram.

He added that rescuers are clearing the ruins and searching for people, Ukrinform reports.

Kharkiv: 9 people were killed in the shelling, including a baby

Nine people, including a five-month-old baby, were killed in Kharkiv yesterday, in a shelling of an apartment block near the city center, said the head of the Kharkiv Regional Military Administration, Oleh Synyehubov.

Among those killed was a family that was simply walking down the street, and the father was holding his five-month-old baby in his arms, which died on his chest. The mother of the baby was seriously injured and is in hospital", Synyehubov said for CNN.

He said that the goal of targeting residential areas in the second largest Ukrainian city is to terrorize local residents.

M777 howitzers for Ukraine were loaded in Canada

Russia has called on Washington to return to a professional and mutually beneficial dialogue on non-proliferation of weapons of mass destruction (WMD), the Russian Embassy in the United States said, commenting on a statement by U.S. Under Secretary for Arms Control and International Security, Bonnie Jenkins.

"We have noticed the remarks of Bonnie Jenkins, which are set to coincide with the open consultations within the Comprehensive Review of the Status of Implementation of UN Security Council Resolution 1540, which is one of the key instruments in the fight against WMD proliferation," the Russian Embassy said.