BRUSSELS -- Serbian President Aleksandar Vucic addressed the media in Brussels after a working dinner organized by Josep Borrell for leaders from the Western Balkans.

BRUSSELS -- Serbian President Aleksandar Vucic addressed the media in Brussels after a working dinner organized by Josep Borrell for leaders from the Western Balkans. 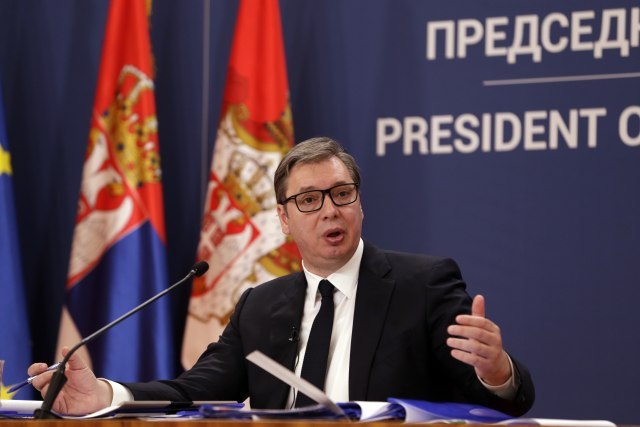 "I am absolutely committed to further work within the Open Balkans Initiative. We had a sincere understanding on various issues, especially with the representatives of Albania and North Macedonia because we are not in an easy position. The situation is very complex for us, and tomorrow will be even more difficult because Ms. Gërvalla has confirmed that she will apply for the so-called Kosovo's membership in the Council of Europe", he said.

He says that they present themselves as a great fighter against Russian fascism and totalitarianism.

"We will schedule a session of the National Security Council in the next 36 hours and we will react politically. It will not be so easy for those who think they can blackmail us and put pressure on us," the president added.

Vučić said that the situation is not simple, but that we have nowhere to go and we have to make rational decisions. He added that he hopes to bring Serbia into calmer waters, but we do not have much maneuvering space, except to fight on the international scene for further withdrawal of the so-called recognition of Kosovo. When it comes to the status of Ukraine as a candidate according to the "Cypriot model", Vučić says that when Serbia makes decisions, they mean something.

"Ukrainians are our friends, and when it comes to principles, wherever you look in the world you will understand that there are no principles and that only Serbia adheres to principles. We must understand that it is important for us to adhere to morals in decision making, and we can only adhere to public law. If we think that we will win because of that or that we will benefit from that, no, we won't", Vucic pointed out.

Asked what to hope for, the president stressed that he hoped for a conversation. In Serbia, he stated, we have a problem in the sense that it is difficult to understand that something is changing.

He added that he was satisfied with today's talks, but that he was not happy with the overall situation. “I don’t want to tell you fairy tales and tell you,‘ Let’s go to sleep, everything will be fine tomorrow. ’I’m not going to do that,” he said. According to him, Serbia must live and as much as it can fight for vital and national interests, it will do so.

"I have no personal fears, I am a political veteran, this is my last term as president and it is my task to do everything I can for my country. I am interested in my people and my country," the president said.

When asked about Serbia's EU accession and speeding up the road, Vučić said that it was our strategic goal, that he could not speak on behalf of the EU, and that our goal was to continue working on fulfilling the conditions.

"As far as the EU is concerned, ask them. I expect a lot to be clarified in mid-June, how it will be, I'm not an analyst, so I can't just say that. We have to turn to the EU as we have nowhere else to go, but of course keeping our interests in mind", said the President of Serbia from Brussels.

It should be recalled that a working dinner was organized in the building of the European External Action Service in Brussels, which was organized for the leaders from the Western Balkans by the head of EU diplomacy, Josep Borrell.

President of Serbia, Aleksandar Vučić, also took part in it. In Brussels, they note that this is an informal working dinner that EU foreign ministers have traditionally organized for leaders from the Western Balkans in order to assess the situation and cooperation in the region, EU engagement with the region and the European integration process of the Western Balkans.

Diplomatic sources of Tanjug in Brussels emphasize that this time, the war in Ukraine will be the focus of Borrell's talks with partners from the region. It is planned to discuss the impact of "unprovoked Russian aggression on Ukraine" on the security and economic situation in the region, including energy and food supplies.

In addition to the President of Serbia, the President of Montenegro Milo Djukanovic and the Prime Ministers of Albania and North Macedonia, Edi Rama and Dimitar Kovacevski, are at the dinner in Brussels. Bosnia-Herzegovina was represented by Serbian member of the Presidency Milorad Dodik, and the interim institutions in Pristina were represented by Foreign Affairs Minister Donika Gërvalla.

Earlier during the day, President of Serbia addressed the media and then commented on Pristina's latest move. According to the media, he will convene a session of the National Security Council after the bad news from Brussels for our country.