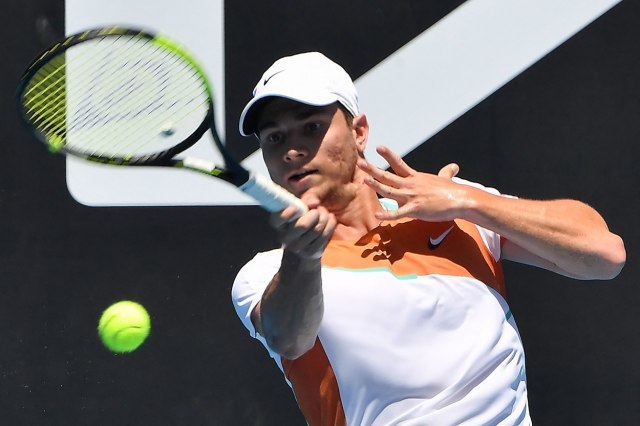 After the saga about Novak Djokovic, few people hoped that Serbia would have an ace up their sleeve in the second week of the tournament, but there is one: Miomir Kecmanovic!

The guy from Belgrade achieved the Grand Slam result of his career by placing in the eighth finals in Melbourne and who knows where he will end up. As I have already said, this is a Serbian route, Miša is definitely walking on it for now.

He and David Nalbandian, his coach, drive an exciting Australian rally!

Finally, for Kecmanović, who, like many of our players, was often unlucky with the draw, the dice were arranged nicely. Blue Melbourne brain, with Serbian motif. To remind the Australians that even without Novak, there is someone to constantly remind them that good tennis is still played here. But also to remind them constantly what sin they have committed.

How many of you said that after the disappointment about everything that happened before the start of the tournament, they will not follow the events in Melbourne? I am very sure, but I know it will not be like that - Serbia will be awake on Sunday, along with its remaining eagle in the sky over Melbourne, Miomir Kecmanović.

As a junior, Miša recorded great results, brought trophies and medals from numerous competitions, it was clear to everyone that he has great potential, as soon as at the age of 13, across the Atlantic, he entered the world of uncertainty, stopping in Bradenton, Florida, in the famous IMG academy of Nick Bollettieri, through which many players have passed, from Monica Seles, Andre Agassi, Maria Sharapova, not to mention them all.

With him, at that crucial time, was mostly his aunt, who took care of him, while Miša slowly absorbed his knowledge and paved his way through the dense jungle of tennis godforsaken spots.

He had an excellent debut pro season, he was the youngest player in the Top 40 for a while, but he, like many, encountered obstacles and stagnated a bit.

Somehow last year, just in the winter, Kecmanović decided to personally address David Nalbandian, one of the players he admired as a kid. He had an idea to start working together, they talked on the phone several times, they came to an agreement and so they started a joint adventure.

It's not a small thing, because before that, after retiring in 2013, David neglected tennis so much that he forgot where he kept the rackets (he found them in the garage by his own admission), but the challenge was strong enough for him to try his hand in coaching waters. The tennis player from the vicinity of Córdoba, from the town of Unquillo, the former number three in world tennis, went gradually with Miomir, and here, it seems, we are slowly seeing the fruits of that joint work.

The Argentine recently said that the agreement is to travel less with Kecmanović this year, but to look for a way that he doesn't feel it, and that again the young tennis player has support in him at all times, including being given advice at the right time.

Nalbandian, a great lover of rally sports, has certainly not forgotten the days when he won over the best in the world and it is obvious that he knows how to transfer his strong octane energy, passion from the rally, to the tennis court again. Miša has become a great fighter and you can be certain that he will bite against Gael Monfils, fiercely convinced that he can make it to the quarterfinals.

And that is already a huge thing for the guy who arrived at the tournament as the 77th in the world and who is already, with this result, waiting for a nice move forward on the ATP list.

Can Miomir go to the Melbourne "eight"? Maybe, of course, because he is younger, fresher, I believe, and hungrier for success than the genius, but capricious Frenchman, who sometimes entertains the audience relentlessly, but when he has a day, he can win at any time. Or when he goes under, what we hope now could happen, he could easily lose.

The two of them played this fall at the Masters in Bercy and judging by that result, we have a very exciting clash ahead of us - Gael managed to turn around and win the match with 4: 6, 7: 5, 6: 3, but Kecmanović will now surely believe that this is an opportunity for a rematch. What an opportunity this is!

Unburdened, inspired, more confident than ever before, Miomir is an enigma for many in Melbourne, even for Monfils, and that is again, another plus for him.

As for the tournament itself, it was left after the men's and without the current women's champion. Novak was expelled from the competition even before the first point was played, and the Japanese Naomi Osaka was shocked by Amanda Anisimova and pushed from 14th to a position outside the 80th on the WTA list after the tournament.

That colorful appearance of the Japanese woman last year, after a problem of a psychological nature, is now coming to fruition and she will need a lot of faith and energy to return to the top, where she was, not so long ago.

Rafael Nadal continued to grind, he overcame another serious obstacle in the form of Karen Khachanov, although with a lost set. And he seems, indeed, very confident in his intention to reach the 21st Grand Slam Cup in his career in Melbourne. But it's only half way, we'll see what happens next.

I can't help but look back at the new episodes in the case of Novak Djokovic, the shameful attacks that still come from some media, about how his silence is a "cowardly act" (Bild), as if the most cowardly possible act was not that horrible avalanche which fell on him from all sides when it was most difficult for him. Then and now they like to shoot him while he is lying on the ground. Where was the slightest bit of media correctness and understanding then?

They are hurt by his silence and let it hurt them. For years, they have been deaf to everything he tells them, for years they have been extremely malicious towards his every idea, attitude, trying to point out existing problems in a meaningful way, and now they are bothered when he retreats and asks for five minutes of his own privacy.

According to his own confession, Marjan Vajda, Novak's ally all these years, did not sleep at night in disbelief about what is happening with Novak in Australia.

"After all, I had to calm down a bit because I still don't understand why they did that to him. I haven’t pushed through that injustice in a very long time. The media are guilty of manipulating information, especially in Australia, where they were constantly against Djokovic," Vajda said.

Former Slovak swimming star Martina Moravcova, who has been living in the United States for years, recently appealed to the public, defending Novak Djokovic and against that crazy division into vaccinated and unvaccinated.

"I absolutely support her. It was an unhealthy and unjust decision of the authorities, based on the assumption that Djokovic could influence something that has not happened yet. I respect Martina not only as an amazing athlete, but also I admire her as a person. Few people have the strength to speak out today", Vajda added in a brilliant interview to the Slovak media, stressing that all this was a "pure political case" and did not understand why there was already talk of Roland Garros and Wimbledon and the restrictions there, when no one doesn't know what will happen to the pandemic in a month or two. Indeed, no one knows.

What we know is who and what Novak is like. And where he will give the best answers to everything.

The skill of champion diplomacy. Without words, but directly, on court.