BRUSSELS -- Hundreds of people marched through the center of Brussels today in protest of tightening restrictions against COVID-19.

BRUSSELS -- Hundreds of people marched through the center of Brussels today in protest of tightening restrictions against COVID-19. 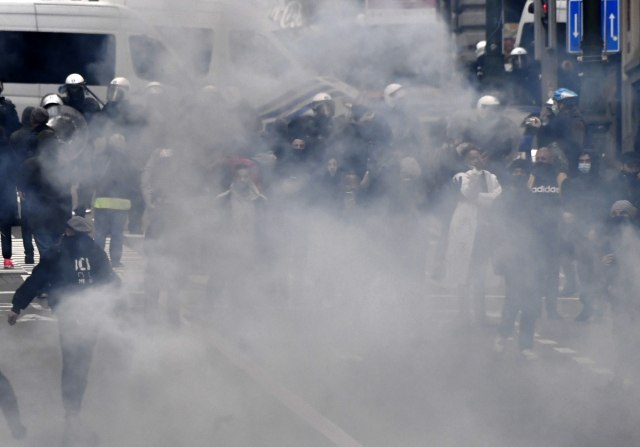 The participants in the march protested against the measures announced on Friday, the third week in a row, when the government tightened restrictions because the latest increase in newly infected with COVID-19 burdens health services, which makes those suffering from other life-threatening diseases such as cancer to be left without treatment, the AP reported.

Shouting "Freedom! Freedom!" and carrying banners reading "United for our freedom, rights and our children", people marched to the headquarters of the European Union.

Some carried banners with criticisms of vaccines and slogans against making vaccines mandatory.

Most of the protesters, who marched peacefully, had already dispersed when about 100 of them ran into police officers who blocked access to the European Commission building.

After a brief clash with police, protesters throw garbage and other items at the police, including bicycles, and set off firecrackers and torches.

Given the largest increase in cases among children, Belgian Prime Minister Alexander De Croo said on Friday that wearing a mask will be mandatory for all children over the age of six.

Until now, children older than 10 were obliged to wear a mask. Primary schools will be closed for the Christmas and New Year holidays a week earlier, and secondary schools will switch to the hybrid system, so they will follow half of the classes from home. Indoor gatherings are limited to 200. The government has previously closed nightclubs and ordered bars and restaurants closed at 11 p.m. for three weeks.

It was speculated that the time of their closure would be moved to 8 p.m., but the government has decided against that for now.