SOCHI -- Serbian President Aleksandar Vucic said after a meeting with Russian President Vladimir Putin that their conversation was friendly.

SOCHI -- Serbian President Aleksandar Vucic said after a meeting with Russian President Vladimir Putin that their conversation was friendly. 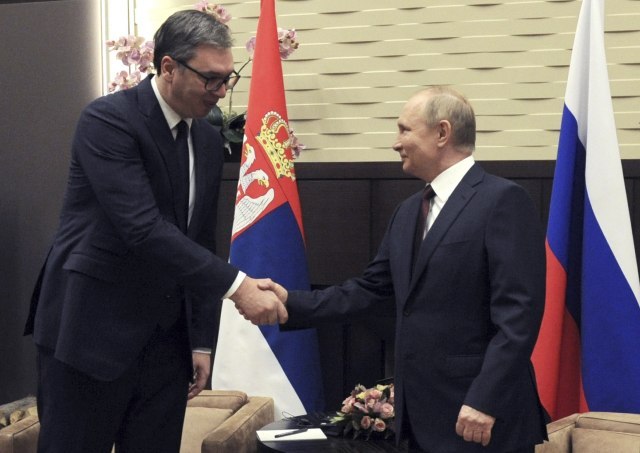 Vučić addressed the journalists after a three-hour meeting with the head of the Russian state.

He said that he agreed with Putin on the price of gas.

"We got an incredible price of 270 dollars in the next 6 months, so that our price would not change, we got an increase in the amount of gas for those 6 months, flexible arrangement. Bajatović literally jumped for joy because he thought it was impossible to achieve," said Vucic.

"We must not be weaker"

Vučić said that Russia would continue to pursue a responsible policy of supporting international law on the issue of Kosovo and Metohija.

"It will take days for us to retell what we went through. Putin had about 90 questions for me, I had my 10 points," he said. As he said, they talked about the situation in the entire region, not only about some territories.

"We talked about it carefully and in great detail," he said. "I spoke unequivocally about what is happening in our region, since we have signed and have good military-technical cooperation, I asked to have the first deliveries before the end of the year, they are very important strategic things," he said. He announced that there will be bigger, strategic things related to the future of Serbia.

"I said that we don't complain, weep and whine when our neighbors get 4 plus and 5 generation planes, but we have to be responsible enough and understand that we must not be weaker and a jack for hitting and that we have be very, very strong", he said, referring to Serbia's military empowerment.

Putin is coming to Serbia next year

The issue of culture was also one of the topics on the meeting, including boxing and Russian experts in Serbia.

Vučić confirmed that Putin would come to Serbia next year and visit Belgrade. "He said - yes, you can expect my arrival sometimes between May and September next year," he said. Putin, Vucic said, said he thought they talked as very close friends.

"Therefore, I am fully confident that Serbia will not be left in the lurch about things that Russia can help with," he said.