BERLIN -- A new law on protection against infectious diseases will enter into force in Germany on Wednesday.

BERLIN -- A new law on protection against infectious diseases will enter into force in Germany on Wednesday. 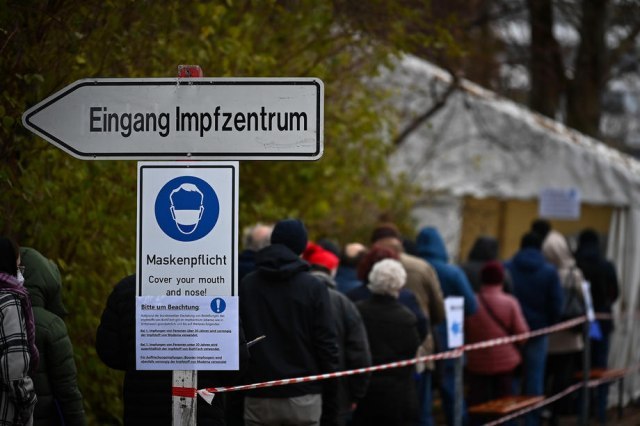 It is unclear whether that will be enough to stop the fourth wave. That is why the introduction of old measures in the fight against coronavirus is being discussed again.

There are many proposals to fight the growing number of infections and they are not new. What shouldn't have been imaginable anymore is becoming a topic again.

Acting Federal Minister of Health, Jens Spahn (CDU), spoke in an interview with the Dusseldorf "Rhine Post" about a possible partial lockdown: "In this situation, nothing should be ruled out, no matter how hard it is."

Will that help? Given the deteriorating epidemiological situation, especially in southeastern Germany, Spahn points out that the conference of prime ministers of the federal provinces, which is planned for December 9, could be held earlier.

"I think we will have to do something earlier. We see that the situation in Saxony, Bavaria, Baden-Württemberg and Thuringia is very serious," Spahn told the Rhine Post. The number of people infected with coronavirus in Germany continues to increase. The Robert Koch Institute has recorded 66.884 new cases of infection in the last 24 hours. That is 14.058 cases more than last Wednesday, when there were 52.826 infected.

The seven-day incidence jumped to a record 404.5. The day before it was 399.8. This is a value that shows how many people per 100.000 inhabitants have been infected with coronavirus in the last seven days.

On the occasion of the growing number of newly infected, the candidate for the new head of the Christian Democrats (CDU), Friedrich Merz, is proposing the introduction of a lockdown for the unvaccinated.

"Those who have not been vaccinated or have not contracted the virus could only go to pharmacies, supermarkets or doctors," Merz told the RND media network. He believes that the pressure on the unvaccinated should be further increased. They would then no longer be able to work: "With the consistent application of the '2G rule', only those who have been vaccinated and those who have been infected with the virus would have access to companies and the workplace - with all the consequences," says Merz.

3G in the workplace, work from home…

According to the new Law on Protection against Infectious Diseases, which enters into force today (November 24), the "3G rule" applies to employees throughout the country. This means that when employees come to work with them, they must have proof that they have been vaccinated, that they have passed the virus or a negative corona test. Unvaccinated people are obliged to present the current rapid test or PCR test to the employer, not older than 48 hours.

The decree passed by the government and the federal provinces will be in force until March 19, 2022. It also applies to all passengers in public transport vehicles. With the introduction of the "3G rule" in the workplace, the obligation to work from home comes again: if there are no justified reasons for coming to work, it should be possible to work from home. Nonetheless, several provinces have tightened regulations again due to a drastic increase in the number of infected.

In the most populous German province of North Rhine-Westphalia, there are new restrictions for the unvaccinated as of today. As the Minister of Health of that province, Karl-Josef Laumann, announced, the "rule 2G" (vaccinated and cured) now applies in many places. As an example, he mentioned cinemas, bars, restaurants, concerts, but also Christmas fairs, football stadiums and other large events.

The "2G-plus" rule applies in discos, clubs or carnival celebrations. This means that not only a confirmation of vaccination and the transmitted virus is enough, but a current negative test for coronavirus is also needed.

Both in Baden-Württemberg, vaccinated people and those who have been infected with the virus need a negative test in order to enter cafes and clubs. In addition, in areas where the number of infected is particularly high, the unvaccinated will be allowed to leave the house in the evening only if they have a good reason and will no longer have free access to many shops - except for grocery stores.

Except in stores, Bavaria introduces the "2G rule" in all places, while in many cultural and recreational facilities the "2G plus" rule applies. Unvaccinated people are only allowed to meet with a small number of people. Clubs and bars are closing, and restaurants will only be open until 10 p.m. There are no Christmas fairs. We have a maximum of 25 visitors at cultural and sports events. In places where the seven-day incidence is higher than 1.000, restaurants, hotels, sports and cultural facilities are being closed. Far-reaching "2G rules" now apply in the provinces of Rhineland-Palatinate, Lower Saxony and Saxony-Anhalt. In Brandenburg, this rule is extended to retail, with the exception of supermarkets and other shops with products for everyday use. Christmas fairs are closing. For unvaccinated people, social contacts are significantly limited. The obligation to attend schools will be abolished, Minister of Education Britta Ernst announced for the public service RBB. In addition, the Christmas break begins three days earlier.