BELGRADE -- In the last 24 hours, another 6.480 infected people were recorded in Serbia, and 41 people died.

BELGRADE -- In the last 24 hours, another 6.480 infected people were recorded in Serbia, and 41 people died. 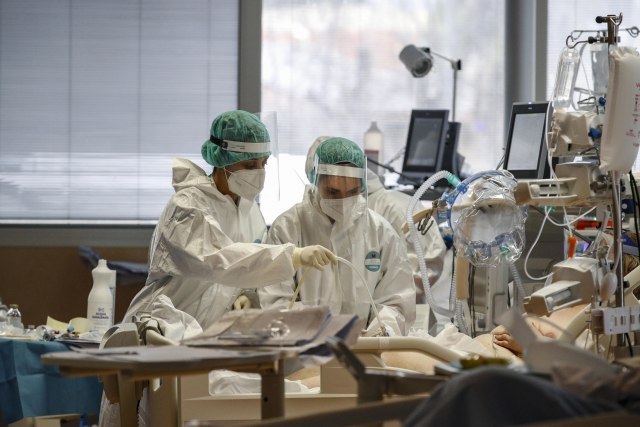 There are 191 patients on respirators.

In the previous 24 hours, 21.454 citizens were tested for coronavirus.

The day before, 23.408 citizens were tested for coronavirus, of which there are 7.201 newly infected. Yesterday, 39 patients died, and there were 195 patients on respirators.

Serbia has officially introduced biological therapy for difficult patients with the latest, 12th version of the protocol for the treatment of coronavirus patients, according to domestic media.

In addition to tocilizumab (Interleukin-6), which as such was already in the protocol, but without any indication that it was a biological therapy, the drugs baricitinib and sarilumab have now been added. This new therapy, the doctor notes, is used in hospitalized patients with a severe clinical picture.

Dr Radan Stojanović, professor of pharmacology at the Medical Faculty in Belgrade, spoke more about that for B92.net. China has produced the first vaccine that could produce antibodies against various strains of coronavirus.

Moderna CEO Stéphane Bancel believes that the coronavirus pandemic will end in one year, given that the increased production of vaccines provides global stocks, the Swiss newspaper The Neue Zürcher Zeitung says.

Vaccination will soon be possible even for newborns, Bancel said. Dr Milanko Sekler, a virologist and microbiologist at the Veterinary Institute in Kraljevo, was among the first to advocate the mixing of COVID-19 vaccines.

That is exactly why he found himself the target of anti-vaxxers, who send him threatening messages and call him derogatory names with vulgar insults, the media write.