ISTANBUL -- Vučić spoke about the attacks from the region, the elections, the opposition, the SNS, as well as the meeting with Recep Tayyip Erdogan while on Istanbul tour.

ISTANBUL -- Vučić spoke about the attacks from the region, the elections, the opposition, the SNS, as well as the meeting with Recep Tayyip Erdogan while on Istanbul tour. 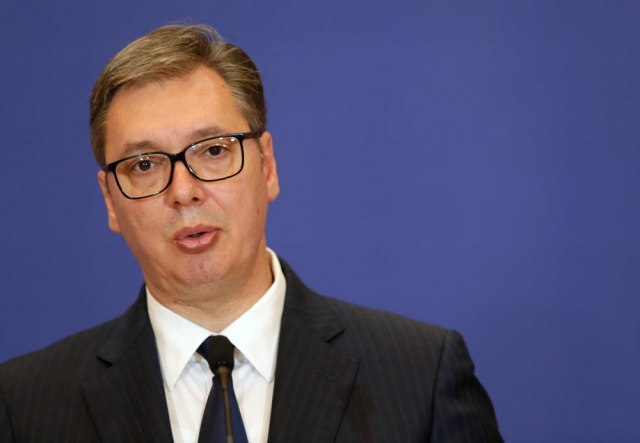 Speaking about the attention Serbia attracted during Angela Merkel's visit to Serbia, Vučić said that he did not think that only her visit caused that attention, but he added that Merkel's visit was very important for us.

"It is, I can't say, the crown of my political career, but it is certainly very important for me to meet Angela Merkel," said Vucic.

"There is always a need to spit on Serbia... Serbia is on the right track, Serbia is progressing and has good results and we don't have to look back. I don't have to call Dodik to discuss Milanovic or Djukanovic. I would leave that role to them", he said regarding the criticism coming from the region.

"Djukanovic sees the future of his country in the assimilation of everyone, and I see our country where everyone can be on their own. He wants to build his country so that there are no Serbs there, and then he will take away the church. They thought of making a list a special section on nationality, where everyone would probably say that they are Montenegrins, and a special part on ethnic groups, so that they could say that 100 percent is Montenegrin nationality, "said Vucic. The President of Serbia reiterated that he never called on Serbs, as Djukanovic and Milanovic claimed, to "flail some flags".

"They put the words of Petar Božović in my mouth and said, Vučić did that," Vučić explained.

Vučić said that he did not interfere in the events in Cetinje, and that he was again declared the main culprit for everything that happened. As he explained, he did not hear from Krivokapic or Abazovic.

He emphasized that a campaign against him in the Croatian media soon began. "Serbia will continue to deal with its economy, its progress, its growth... Serbia will not respond in a chauvinistic way. We will always lend a hand and build our relations with both Croatia and Montenegro," Vucic told critics. In a nutshell,given that there were about 50 articles about him in the Croatian media, he said that he became a star overnight.

"I became a bigger star than LeBron James," he said. "I am also guilty of giving Vukan such a name. As Danilo does not remember, maybe it was my attempt to influence the Croatian throne. And they published this in the most serious newspaper. They claim that I gave Vukan such a name because it is the first son of Stefan Nemanja, so I want to create a Greater Serbia - said the president, and added that this is the difference between us and them - because we do not determine what names children will get", Vucic pointed out.

He further stated that he was the main "culprit" in the region.

"As far as weapons are concerned, they made a feuilleton about me. My picture, and what Serbia bought and procured. Every part, if necessary, I can send them an invoice, to see what we bought. When I see all these attacks, I remember the words of Bishop Sergije, who told me: 'As long as they attack you, Serbia is doing fine".

Regarding the statements of Bakir Izetbegović that Serbia should not send vaccines, he said that he believes that he is wrong and that Serbia wants a friendly relationship with everyone in the region.

"When they can't humiliate you, when they see that aggression against Serbia is difficult or impossible, then that is a problem for them," he said. "He is talking about the case of Edin Vranje... You know that it was fair, vaccines are needed for people, if we saved the life of one man in Sarajevo, I am happy about that. That is why I appeal to our authorities to get in touch with the Bosnian authorities, to explain once who is working against whom and the like. We desperately need an agreement with Bosniaks", said Vučić.

"The essence is that we do not want to change the borders. We just want to have our own country and have friendly relations in the region. But do not blame us for loving Republika Srpska," he said.

As announced, Vucic will meet with Turkish President Recep Tayyip Erdogan in Istanbul.

"I am convinced that Sasa Jankovic told the truth and told exactly what was happening. You know that secret services are working in our country and it is no secret that some countries are not enthusiastic about Serbia's rapid progress. Why would anyone look forward to faster development of Serbia than Montenegro or Croatia?", he said.

"They're trying to get rid of me"

"I do not suffer at all because Serbia has no sea... It is work that makes a difference. If you look at Weber and Calvin, they have always insisted that work makes a difference, so we need even more factories and new plants", claims Vučić.

"The bottom line is that they are trying to get rid of me, not because I am important or beautiful. But because they have realized that the issue of leadership is extremely important, so if you make a mistake on that issue, you will pay dearly for it," he added. .

As he added, he bothers others because of setting up high goals.

"Five years ago, you had a chase on us because of Savamala and Belgrade Waterfront. Today, you have no one who doesn't go there. Some brave people are going to work in Pozarevac-Gradiste-Golubac today, some brave people built the Cacak highway...", Vucic said. .

He also said that he would submit a report on employees in Vranje. He will go there and talk. When they see that when he gets 70% of the votes from Vranje, they will refute the false news about the situation in that city.

"I don't think that is particularly important, but we are ready to do everything to make others feel better," Vucic said, considering that the elections are approaching, Djilas is giving up the inter-party dialogue, and he tried to blackmail Brussels.

When asked what they want, he says - the government. You could read their ideologue Veselin Simovic, who said that the reason for not going to the polls was the weakness of the opposition, and not the election conditions. Children as young as 10 do not vote in Serbia, so you can deceive them. In 2012, you did not have a newspaper against the government, and today you have many of them who write the biggest rubbish, just to publish something, said Vučić. He said political games were "okay", but he condemned bad speech against his country. He also made an analysis in the SNS - the most popular among the people are those who have the most negative image. He explains that it is because they are fighting and suffering blows. Tomorrow, the session of the main board of the SNS will be held, and this is the first one at which Vučić will not be present.

"I think that the fact that Sasa Jankovic told the truth is very significant for our country. It will be included in textbooks in 20 or 30 years."

"Don't forget that this is a man who got few votes. He talked about what was really happening. It is not a question of whether my heart will fail on me, he certainly wants it, the only question is when".

He is not afraid of heart failure, let alone the people inside and whether someone will replace him.

"The SNS is not a party where most people are in power all the time. We also have people in the SNS who have been here since we were in power, that's about 30 percent of people".

More than 10 meetings with Erdogan

"A lot I can see in a few months and a year. I had talks with 14, 15 big Turkish investors yesterday."

"I talked to a young man who married a Serbian woman from Mali Zvornik, opened a company and employed 160 people. And he has plans to employ another 200 to 300 people. Do you know what that means for Mali Zvornik. Or places like Lebane, Krupanj, Leskovac or Zitoradja. You can't take Bosch and Siemens there, but we have to think about our rural and suburban part. It's the second salary in a family," the president said.

"Turkey is a big regional player, we are much smaller than them in every sense," he said.

Vučić said that he met with Erdogan more than ten times, as well as that he called him every time there was a problem.

"I often hear from Erdogan. He is a man who is very caring, and always calls. Both when Vukan was born, and when there were health problems. The Turks take care of that," Vucic said.

He says that there is always only one truth, and that work and results are his main weapon.

"What matters is what's left behind. All people are mortal, except those who leave great deeds behind, and when you dream big dreams, so people remember you in fifty years, that's a great thing. As we do today. we remember Stefan Nemanja, Karadjordje, Milos, Aleksandar, Mihajlo, Milan, Petar and Aleksandar... I am convinced that someone will remember me in 100 years, and I live for that", concluded President Vučić.

Vučić was welcomed at the Istanbul airport with the highest military honors, it was announced on the official Instagram account "Budućnostsrbijeav".