SKOPJE -- Big regional economic forum is being held in Skopje within the Mini Schengen initiative, where the President of Serbia, Aleksandar Vučić, is also participating.

SKOPJE -- Big regional economic forum is being held in Skopje within the Mini Schengen initiative, where the President of Serbia, Aleksandar Vučić, is also participating. 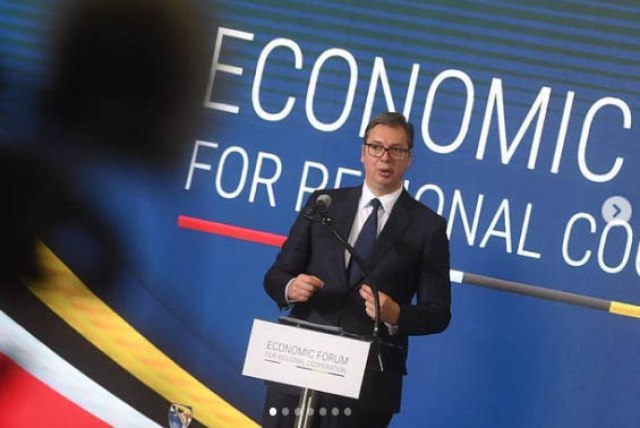 The prime ministers of North Macedonia and Albania, Zoran Zaev and Edi Rama, are also taking part in the forum.

Vučić was first handed letters of thanks for his help in the fight against coronavirus and donations of vaccines to North Macedonia. He thanked them and then announced the big plans that North Macedonia, Albania and Serbia have.

"What we are doing in Skopje, Tirana and in Belgrade are great things. If we succeed, it will be a huge success, and if we fail - at least it will be known that someone tried. In the next year, we want to achieve that at least in three countries we can enter without borders, for trucks driving from Skopje to Belgrade or Tirana to pass without stopping, without anyone asking them anything, while others will have to stop for a while", Vucic said.

He emphasized that the three countries should show that they are "no longer minors" and that they do not have to serve anyone except the people.

He also said that most companies came to the economic forum from Serbia - 217, which shows how much interest there is in Serbia for cooperation in the region.

"When we started with this initiative, it seemed to all three that it was something good, something that was changing things in the Balkans. We decided to turn our heads from the past to the future," said Vucic.

He added that sincere trust has developed in the last two years. "It is important for us to show to the people of our countries that we are able to make decisions on our own and improve the lives of citizens, to be on the European path but not to wait for someone to lead and guide us, but to work in the interest of our citizens", President Vucic said.

He pointed out that if the three countries manage to enable them to pass through without borders in a year and a half, it will be a historic achievement. "There is no stopping, whatever you sell or buy. There is a lot to do there, but it is the only way out for our economies," he added. He pointed out that there is a problem with the lack of labor force in a part of Serbia, and that Albania and North Macedonia can help provide qualified staff.

"We have countless opportunities. Our three countries will end the year with a total of 76 billion euros of total GDP. That is less than Slovakia. And we can surpass them in five, six years and completely change the balance of power. We can be a development machinery and the machinery of growth of this part of Europe", said Vučić.

He adds that this shows that the past can be left behind and the future can be seen, and that everyone can only benefit from this, and no one can be harmed.

"Of course, there will always be opponents who do not think about the economy in the long run, but only about the next close elections. I know that not many in the world are thrilled because the steering wheel is not in their hands, but in the hands of our three countries. Our citizens are wondering: Why would we wait for alms when we are able to make big profits?", the President pointed out, adding that the three countries can cooperate in all areas.

"Zoran Zaev spoke about the green agenda. All would like us to be energy insecure, so that we would have to import both electricity and energy in the next 50 and 100 years. Our job is for our experts to sit down and see how we can provide for ourselves. Rama suggested that we talk about how and in what way we could manage cargo traffic, terrain traffic, because if you do something for only one country, and you don't have a port like, say, Durres, then it is meaningless," Vucic said.

He added that all three countries would do their best to overcome the weaknesses of the administrations.

"If we are able to do that, on January 1, 2023 - we have no borders between our countries. We have them, but there are no borders for our citizens. You go from Belgrade to Tirana and no one stops you anywhere, and vice versa, thus increasing security of our citizens", Vučić pointed out.

The President pointed out another thing as especially important.

"We have already talked about it with the representatives of our Chamber of Commerce, and I mean with the representatives of the Macedonian and Albanian Chambers of Commerce, we will embark on concrete initiatives to provide benefits for the citizens of our three countries. These include discounts on tickets, tolls, and if for some reason, the Europe won't let us do that, we will find another way. We will talk about discounts in restaurants, hotels and everywhere we will find the possibility that if you are from one of these three countries, you have a discount of three, five, 10 or more percent and then people will be able to feel from their own experience why it is good for them", Vucic explained.

In response to the statement of the President of the PKS, Marko Čadež, on building trust in the region, and through this initiative, Vučić pointed out that trust, reliability and loyalty are the most important and should serve as a mutual support.

"It shows that we can be more helpful to each other, in the way we expect support from everyone else. We should not forget the help of the first neighbors, and we seem to undermine trust, we lose hope in each other. We need to overcome that, to believe in our own capacities, to become reliable partners and to trust each other", said Vučić. He added that the public administration must transfer that trust to the citizens.

"I believe that the citizens have started to get to know each other better. Earlier, we found enough excuses to insult each other, and we did not find ways to cooperate, but only how to achieve political points. Today we do not care about that, but about the common future and results", Vucic pointed out.

He invited others from the region to join, if they wish, stating that they would be welcome everywhere.

"Serbs who visited Albania and who are still on the Albanian coast feel safer after today's meeting. We must send such messages to the people. I am a strong supporter of this initiative and I believe that those who inherit it will continue, because this is not an initiative for a few politicians, but for the benefit of the citizens", Vucic pointed out.

It was also announced that the new name of the initiative, formerly known as "Mini Schengen" would be "Open Balkans".

"We do not have an easy road ahead of us, we have to work hard and convince our people to be diligent. If we do all that, then one day from Tirana to Belgrade, if we only go by highways without stopping, we have made a huge success", Vucic pointed out.

He thanked Zaev and Rama for their cooperation and mutual efforts directed at this regional initiative.

Prime Minister of North Macedonia, Zoran Zaev, said that a new era of cooperation in the region begins today.

"This is an invitation to participate and be active actors, and to carry the message that the Balkans are moving to create the highest level of cooperation. I want to assure you that our political will is such that we do everything to establish effective cooperation", Zaev said.

"Our goal is to connect our economies for a better life for every individual and citizen. People should feel the economic benefits as soon as possible, and we expect to feel the improvement of the lives of citizens soon," Zaev points out. He adds that what we are building today is the result of European values, because all four freedoms of the EU are there.

"We are committed more than ever to implementing 4 freedoms. Movement of goods, infrastructure, 24 hours of work of all services, as well as expansion of all corridors," Zaev explains.

Rama: Whoever wants to join us is welcome

Edi Rama points out that this initiative is needed, not only for the three countries, but also for all the neighboring countries.

"I think we will have a positive day for all of us, for all countries in the region. The mosaic of participation covers a wide range that goes beyond our countries. I think it is enough to look at that mosaic of diversity to understand the importance of this initiative," Rama added.

He points out that one should not look to the past, live in the past, because the three countries need to understand how small they are, if they do not unite.

"Some people have been punished for living in the past, and we want to project ourselves into the future through a joint initiative. This region brings with it an example like the EU. We have one goal - to bring four kinds of freedoms to life," Rama said.

"This is not an initiative of Albania, Serbia and North Macedonia, whoever wants to join us, this is good for everyone, not just us. We do not have the luxury of wasting time, we have lost centuries," he stressed.

The forum brings together about 350 companies from the Western Balkans.

The Economic Forum for Regional Cooperation is organized by the Chambers of Commerce of Serbia, North Macedonia and Albania. Business meetings of businessmen in B2B format (business to business) will also be held.

The Skopje Forum on Regional Cooperation at the WB brings together companies from Serbia, Albania, North Macedonia and Bosnia-Herzegovina, as well as other regional and European economies, including the representatives of governments, financial institutions, universities, international delegations and associations.