BELGRADE -- Vučić reacted to the allegations that appeared in the media, that Veljko Belivuk allegedly stated in his testimony that state leadership asked him for services.

BELGRADE -- Vučić reacted to the allegations that appeared in the media, that Veljko Belivuk allegedly stated in his testimony that state leadership asked him for services. 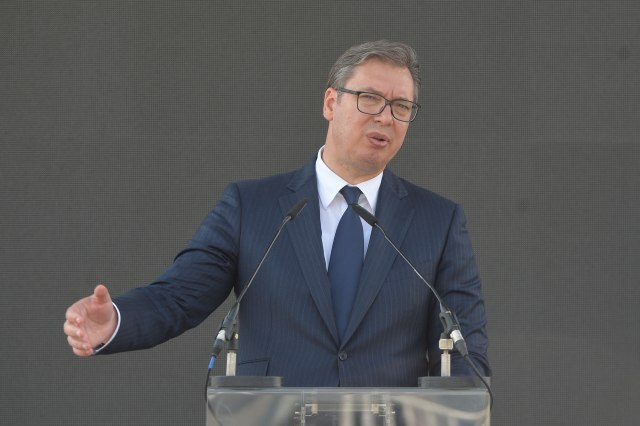 President of Serbia said that these allegations were absolutely false and that his name was intentionally mentioned, without mentioning the name of those who cooperated with Belivuk.

"One nice gentleman first said that he did not kill or slaughter anyone and that they were nice gentlemen who were accommodated by the regime and that they did all this in agreement with me. Then one said that we met in an apartment in Zvezdara, and the other that we met at the house in Ritopek", Vučić said, answering the questions of the journalists to comment on Belivuk's claims.

"I was thinking whether to answer, but I will address the nation soon, regarding this issue, I need 48 hours," he pointed out, adding that he was ready to go to the polygraph in public and to give statement to all competent authorities "so that everyone can see he was telling the truth".

Vučić pointed out that, if he saw them at any location, or talked to them, he was not only ready to resign from the position of president, but also to report himself and stay in prison for the rest of his life.

"Why did they choose such a way of defense - it was not they who came up with it, but those who bring them messages. We will disclose how the mafia counselors brought those messages," he announced.

According to him, it is logical that all this is happening because Belivuk and Miljković are trying to get themselves on the political map because they have had political support in certain media so far.

"I now expect Belivuk to be a candidate for president, and Marko a 'butcher' for prime minister, because they have indebted some people so much," said Vucic.

He added that he was glad that he was mentioned. "I am ashamed to answer to criminals. It is clear to everyone that they mentioned me because they did not meet with me and they haven't mentioned the ones they saw."

I have never seen them, nor have I met with them, the president emphasized and added that the state has more evidence, among which is that the Belivuk group planned another murder.

The prosecution, as he says, has enough evidence that this criminal group, which he said is the most monstrous, will never get out of prison.

"You will see, we will show everything, when people see what they have been doing. These are 'trifles' so far. They are officially charged with five murders and they have performed 40," Vučić states and says:

"I knew how the campaign against me would follow and for how many years. The first time I said that I did not understand how it was possible to change the DNA finding regarding the murder on the rails, my wiretapping started, along with the campaign that I saved some women from court proceedings because they were my mistresses or whatever, to the point that I had relationships with men, some TV hosts."

"All the time, they essentially tried to racketeer me. And in this text they say 'if Vucic doesn't come to his senses'... I will not pay the racket, I will continue to show the people that we will defeat murderers, criminals and all their allies, both political and and the media and everyone else. I will not retreat before the murderers and butchers, and their political allies", he said.

Vučić said that he would "fight as long as he is alive, fight for a free Serbia, and that no one will ever have the right to kill anyone."

He reiterated once again that he would reveal the ties of the criminals with the mafia counsellor, who met with them yesterday, two and three days ago, agreeing on what kind of campaign they would lead against him.

"No matter how hard it is for me, I will fight against the killers, and I'm not proud of the fact that they saw me as their greatest enemy, someone they can't bribe and scare. None of them will ever scare me, I'll fight for the truth to the last breath," he said.