BELGRADE -- Another part of the building in Vidovdanska Street in the Belgrade municipality of Vracar collapsed today.

BELGRADE -- Another part of the building in Vidovdanska Street in the Belgrade municipality of Vracar collapsed today. 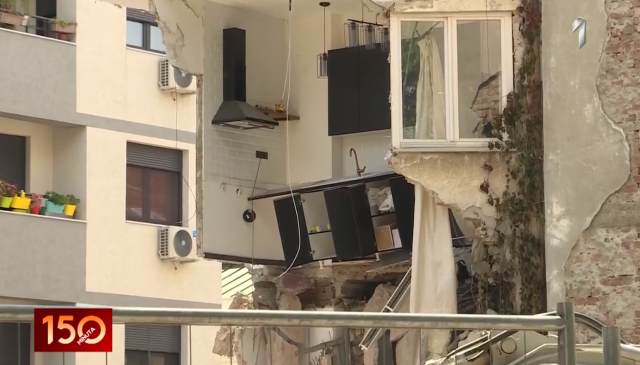 Nikola Jelenković, the head of the office of the president of Belgrade municipality of Vračar, said in a conversation with TV Prva that the city municipality, in coordination with the city of Belgrade, is taking all necessary measures to resolve this situation.

One of the tenants for TV Prva described what happened on Friday, when the first building collapsed.

"I was in the apartment when the part below me fell. Everything around me was trembling and cracking. I went to the kitchen, thank God I didn’t stay there. The window could not be closed, the frame fell off the wall. The ceilings around me started to crack and then I ran out… The walls were cracking before that... I lost hope... Until a while ago, I had hope, now I said goodbye”, a tenant for TV Prva said.

"We prayed, called constantly for something to be done. It's impossible that nothing could be done," she added in an interview for TV Prva.

According to the first information, it collapsed due to the construction site located at Vidovdanska 4.

Just to recall, the tenants said on Friday that they had been warning about the collapse of the building for a long time, because the tiles and walls had cracked in the previous days.

Belgrade Deputy Mayor Goran Vesic said on Monday that all those responsible for the collapse of the building would be held criminally responsible. He also stated that he would submit a request to change the law.

He stated that the City of Belgrade organized for the families of the tenants to receive help from the Center for Social Work.

"What I can promise is that they will all get a roof over their heads. I will not allow a situation like the one in Dubljanska Street in 2008, when the building collapsed and people have not yet been granted apartments, neither is their housing issue resolved. I will not allow it, people will get a roof over their heads. One of the ideas is for the City to construct the building and charge the investors for it, to put a notice on the adjacent plot and ban them from doing any construction work on that plot in court proceedings and in the meantime people will be accommodated, and the City will go to trial with the investor", Vesić pointed out earlier.