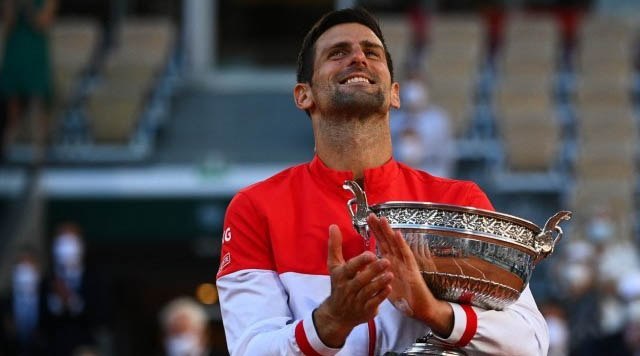 After the first set was over, it seemed as if Novak Djokovic was moving a little slower...

"Well, yes, it did hurt a little bit. Nothing special happened to stop me from playing. However, I did feel the consequences of that fall, it held me for half an hour. Poor performance disturbed my pace, hit me a little in a psychological sense, so I struggled on the serve as well, I couldn't really hit the first serve... I don't want to take away Tsitsipas' great game and belittle the two sets he had won", said Novak Djokovic.

Novak Djokovic has won 19 Grand Slam titles, 84 tournaments and seems unstoppable, and the journalist was interested in whether Saint Sava accompanied Novak.

"My guardian angels are here with me. I have my own special corner, it's a secret and I can't reveal it, but for now, it's been doing a great job," says World No. 1.

Serbian national anthem "God of Justice" was heard from the loudspeakers at the Philippe Chatrier Stadium, and Novak sang all the time, while the Serbian flag was rising on the mast.

"It is a great privilege to be in the company of such champions, Byrne Borg and Jim Courier. That is the history of our sport. Stefanos, I can relate to what you're going through, but these are the opportunities you learn the most from. Knowing you and your team, I know you will get out of this stronger, and I believe that you will win many Grand Slam titles, respect for you and your team", Novak said, addressing Tsitsipas, who was very sad.

Novak then added in French: "The dream is to be here. A great battle for one of the biggest trophies in our sport. I got a lot of inspiration and motivation from my family attending this great tournament. However, I still had to find a way to beat Stefanos after a difficult match with Rafa. Without that, it would be impossible. Stefanos said that this is a team effort, he is right. I am happy, I hope that I will come next year as well and that I will not stop here", Novak added.

He did not miss the opportunity to greet all the fans in Serbia, but also to comfort the Greeks. "I would like to thank everyone in Serbia who supported me, as well as these people who came here. The atmosphere was great, against Rafa and now, these are unforgettable moments for me and my career. I will remember these 48 hours my whole life. I am sending messages to my brothers and sisters in Greece, you have great champions in Stefanos and Maria, I wish you good luck in the future".

Byrne Borg said that he is happy to revisit the place where he had a lot of success. "I want to say that it's great to be here with two great champions like Stefanos and Novak. Seeing them play is an unreal experience. I'm happy, tennis is a difficult sport, but there is only one winner. It's tennis, I'm happy to be at Roland Garros, this is one of the biggest tournaments in the world", Borg concluded.

For Novak, this was the 19th Grand Slam trophy and the second this year, so he managed to become the first player after 52 years to win at least two trophies in each of the Big Four tournaments.

There is not much time for rest, because Wimbledon is just around the corner, it starts on June 28.