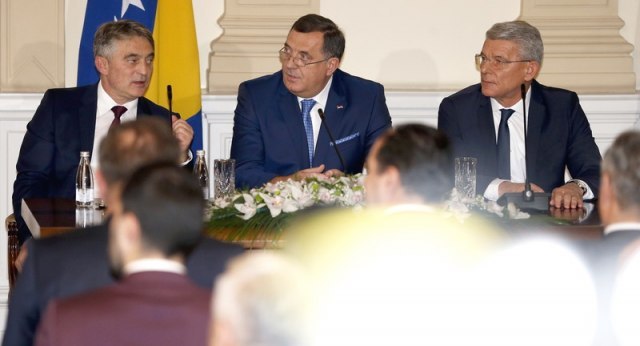 As these words were interpreted by the Sarajevo media, Sattler "actually repeated" the position of the head of the HDZ Bosnia-Herzegovina, Dragan Covic, who last week uttered a similar sentence - "how difficult it will be to organize the elections in 2022 without a new election of the Law" and that this could lead Bosnia-Herzegovina to a political and institutional crisis.

Sattler said he "had a good and open exchange of views with Bosnian Presidency member Zeljko Komsic on EU accession, as well as 14 key priorities, electoral reform and reconciliation".

Namely, it is about the demands of HDZ BiH, but also of the Croatian HDZ, that the election law be changed so that each nation elects its member of the presidency, and not that, as was the case with Zeljko Komsic, he "was elected by Bosniaks or other people".

Leaders of the HDZ BiH and the Croatian government believe that "legitimate representation of the people" must be taken into account when amending the Election Law. The Government of the Republic of Croatia strongly advocated for that in Brussels, and the Minister of Foreign Affairs Gordan Grlić Radman sent a "non-paper" in that regard, demanding that the election law be changed in that part because, according to him, the current law is "unfavorable for the Croatian people in BiH. "

"Recently, Ambassador Sattler was under great pressure from those who want to obstruct electoral reform and do not shy away from defamatory language. This is unacceptable and we should send a strong and unique message of support to Ambassador Sattler," Gordan Grlic-Radman wrote to EU leaders. If "the Election Law is not changed this year", there will be a "great political crisis in 2022, which will paralyze the country's political institutions and stop the whole reform process".

According to Bosnian media, "due to pressure from both HDZs", Johan Sattler embarked on "diplomatic activities, for which he met with Zeljko Komsic, to whom, according to the investigation, he said that "the next elections will not be conducted without changes to the election law".

Sattler also received open support from the Croatian government when it comes to changes to the Election Law.

This position of the head of the EU in Bosnia-Herzegovina is especially interesting due to the imminent arrival of the new High Representative of the International Community Christian Schmidt, where it could also be heard on the sidelines that he also wants to resolve this controversial election issue so as not to hinder his main task - taking Bosnia-Herzegovina on Euro-Atlantic road.

The media state that Dragan Covic received support for changes to the election law from Milorad Dodik, a Serb member of the BiH Presidency, and it is speculated that Bakir Izetbegovic, a Bosniak leader and SDA leader, is not entirely in favor of it.