PARIS -- It is known when Novak Djokovic and Rafael Nadal will be on court on Friday.

PARIS -- It is known when Novak Djokovic and Rafael Nadal will be on court on Friday. 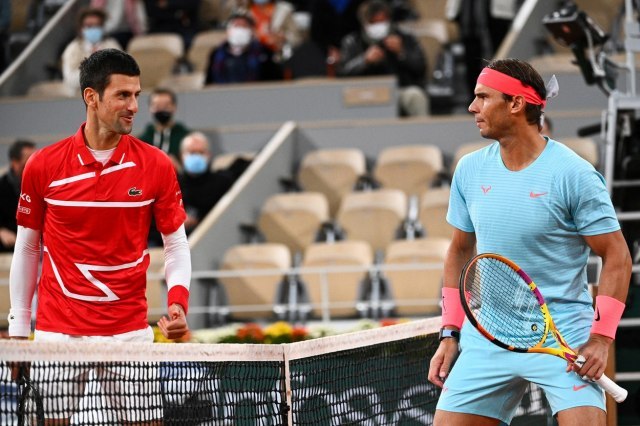 The semifinal match of Roland Garros will be played at "Philippe Chatrier", not before 17:30

The first semifinal duel between Stefanos Tsitsipas and Alexander Zverev starts at 14:50.

When they finish, Rafa and Novak will appear on the court.

So the match is not expected to start before 5:30 p.m.

According to tradition, successes, conditions and everything else, the favorite on RG court is certainly Rafael Nadal, a man who has won Roland Garros 13 times.

He has been dominating in Paris for a decade and a half, however, one of the two defeats on this court was inflicted on him by Novak in 2015.

This will be the 58th duel between the two aces, and the best tennis player in the world currently has one more victory.

In this, "prestigious" view, the next duel is very important, simply because Nadal, if he wins, will even the score and will not be behind. Nadal has reason for optimism, since he achieved as many as 19 of his 28 victories over Djokovic on clay.

At Roland Garros, when we look at the overall Nadal statistics, there are as many as 105 victories from 107 matches.

"The numbers are great, aren't they? But I can't think about it right now, I will think about statistics when I finish my career. Now is the time to be happy, because I won an important match against a tough opponent. It's time to start preparing for the semifinals. I have to rest, train a little tomorrow and feel good. That's it," Nadal said.

The Spaniard, however, notes that it is a semi-final, not a final.

"We know each other well, anything can happen. The one who plays better that day will have a better chance of winning, won't he? It will be an important match for both of us. However, it is a semifinal, not a final and that is a big difference. Whoever wins, he will have another match to play to win the title", Nadal pointed out.

In addition to the ratio of victories in mutual duels, a much more important aspect of the next match concerns the GOAT race, i.e. one of the most important parameters, the Grand Slam title.

Novak holds practically all important records - trophies, head-to-head matches with the biggest rivals, Masters, however, the number of the biggest titles is still cited by many as the most important criterion. Of course, Djokovic knows that, and the confirmation for that is the focus on the Grand Slams.

Nadal's eventual triumph would push him towards the 21st Grand Slam title. Because, it is really difficult to expect that Tsitsipas or Zverev, in Paris, in a match on three won sets, can harm the Spaniard.

Again, on the other hand, if Novak managed to stop Rafa on his field, he would gain a huge psychological advantage to continue this race, which has been going on for years.

Such hope existed even in the fall, when the two players met in the final. However, we know how it all ended.

Conditions then increased Novak's chances of success, but he was simply absent in the first two sets. He woke up in the third, but it was too late.

It is a common opinion that it is much better for Novak to meet Rafa before the finals, just as was the case in 2015, when he only beat him in Paris.

However, Djokovic points out that he absolutely does not care in which round he faces his biggest rival, the first round or the final. "Playing with Nadal in both the first round and the final is the same for me. He dominated on this court, I had that feat and victory in 2015. I will analyze that match. He and I are different players today. I will definitely try to play better than last year in the first two sets. Today he also had difficulties in the first three sets with Schwartzman. We played a close match in the final of Rome a couple of weeks ago. I know what awaits me. I am ready. I am exhausted of course because of of this match, but the good thing is that I have one and a half days to recover. It is the semifinals that many wanted and expected. Now we are in that position. Let the better player win. I believe in my victory, quality, abilities", Novak said. Djokovic does not want to reveal the recipe before the match with Nadal, but he still hinted at something. "His forehand is always so dominant. He causes a lot of problems to his opponent with that shot. He spins a lot, rotates, defends well. He returns to the game with high balls, to a point. He is wise and experienced in playing on clay. Needless to say, he improved his serve, and we don't need to talk much about the defense. I have to be aggressive, but also tactically smart," Djokovic added. If Djokovic made a feat and broke Rafa, it seems that nothing could stop him from breaking the record in the number of Grand Slam titles.

We will find out everything on Friday, not before 5.30 pm. More precisely, immediately after the first semifinal, in which Stefanos Tsitsipas and Alexander Zverev will meet at 2.50 pm.