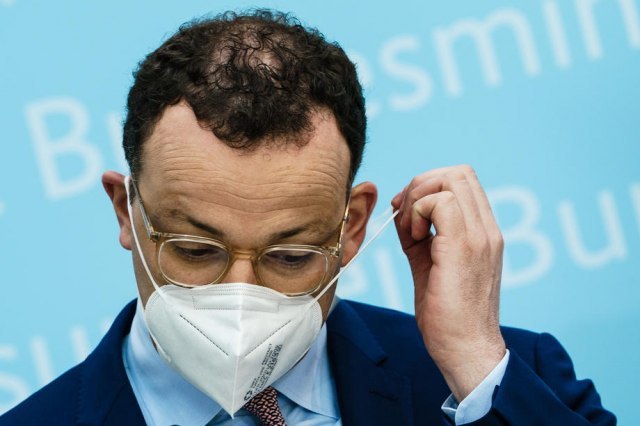 According to Spiegel, the ministry procured unusable masks from China last year, which will have to be destroyed. To this day, they have hidden it from the public.

In early spring of last year, when the pandemic hit Europe with full force, the obligation of "mouth and nose cover" was introduced in Germany, for example in stores. This formulation was not chosen by chance - it was enough to wear a scarf or shawl over the mouth and nose, or any homemade mask. Because, even the greatest enthusiasts could not find real hospital or FFP2 masks in shops and pharmacies.

In that panic, the Ministry of Health procured hundreds of millions of masks from China, which, as SPIEGEL magazine now reveals, proved to be unusable. In Germany, they received permits quickly, without valid testing, but mostly remained in warehouses.

The internal correspondence that the weekly Spiegel has an insight into shows that the Ministry of Health, led by the Christian Democrat Jens Spahn, has been conducting a lively correspondence with the Ministry of Labor, led by the Social Democrat Hubertus Heil, for months. Because, in the end, the Ministry of Labor issues use permits for masks, and it did not want to approve these. According to the weekly, the Spahn's ministry even tried to distribute the masks to social assistance recipients, people with disabilities and the homeless, instead of for regular use.

A compromise is now reportedly being prepared: unusable masks should be declared a national reserve, waited for their expiration date in four years, and then burned. "A billion euros will end up in the trash," Spiegel writes.

It may be that the documents did not reach the journalists by accident right now. At the end of September, parliamentary elections took place, and in the last year, numerous scandals have accumulated around the Minister Spahn and, in general, the Government led by the Christian Democrats Angela Merkel. From the slow procurement of quick tests and the late start of vaccination, to the scandals in which the Christian Democrats became rich as intermediaries in the procurement of masks and other protective equipment.

Social Democrat MP Angelica Klekner has now reacted to SPIEGEL's writing, especially to the Ministry of Health's attempts to distribute unusable and dangerous masks to socially endangered groups of citizens:

"Christian Democrats must consider what the consequences will be in the Ministry of Health and for Mr. Spahn. "Not everything can continue as before," Klekner added.

Maria Klein-Schmeink, the Green MP, also asked for consequences for Minister Spahn, calling the whole matter "unforgivable". "What Spahn did is not only cynical, but also incompatible with the duty of the Minister of Health," she said.

One of German most popular politician, Jens Spahn, at the beginning of the pandemic when strict measures were introduced, has lost trust in the eyes of the public in recent months. It was also learned that in October, exactly on the day when he warned that private parties were the biggest problem in the pandemic, Spahn went to an evening party in Leipzig. That party with a dozen people was rather lucrative - guests were asked to contribute to the Spahn's campaign for the Bundestag elections, but to pay 9.999 euros each. Why that amount? Because donations of ten thousand euros or more must be made public.

Recently, Spahn blamed the citizens of Balkan and Turkish roots for the second big wave of COVID-19, who allegedly brought the virus to Germany en masse last summer. As DW has already written, the figures refuted Spahn's claim.