BELGRADE -- We discussed many important issues as well as EU integration, as Slovenia is taking over the presidency of the Union, Vučić stated after the meeting with Pahor.

BELGRADE -- We discussed many important issues as well as EU integration, as Slovenia is taking over the presidency of the Union, Vučić stated after the meeting with Pahor. 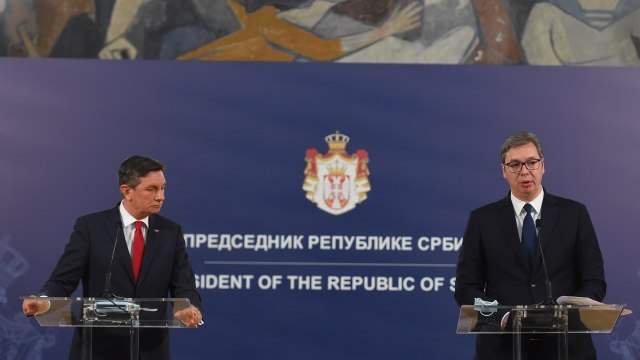 For us, the role that Slovenia has in the region is important, and we have always responded to the Brdo-Brioni Summit, said the President of Serbia after talks with his Slovenian counterpart Borut Pahor in Belgrade today.

"For us, the most important issue is Kosovo, we want to have a dialogue and we have always been for that. We see how the frozen dialogues end, being activated every five years and there are dead people," Vucic said.

"We are in favor of a compromise solution, we do not know whether we will succeed in that, because two are needed for an agreement," he said.

Pahor said that the main reason for his visit to Belgrade was the preparations for the Brdo-Brioni Summit. He also said that it was important for Slovenia that the enlargement process did not stop and that his country was committed to ending that process as soon as possible.

"We are now leaders and we have a responsibility for peace and stability, and I think only if we start on the path of reconciliation and reforms can we expect faster enlargement, which the EU will see in the end as its duty," Slovenian President said.

Asked whether the EU would support Slovenia's plan, Pahor said that it was evident that there were two types of worrying fatigue - EU fatigue related to enlargement, but also fatigue in the Western Balkans from waiting, which is why there is no more enthusiasm in those countries.

"It is not in the interest of either of them," Pahor said, adding that Slovenia wants to warn the EU that only in that way, by accepting the Western Balkans, can it solve that geopolitical issue.

"If, after all, you look at the map - the Western Balkans is surrounded by the EU, and the total population should not be as much of a problem for Brussels as, for example, the problem around Turkey," Pahor concluded.

Asked whether Serbia is tired of waiting for the EU, Vučić said that Serbia is on the EU path and that it supports all others on that path, Albania, North Macedonia, Bosnia-Herzegovina, and did not oppose visa liberalization for the so-called Kosovo.

"We think it's important that we encourage each other and we have nothing against a general comprehensive approach," he said.

"As for the EU's relations with Serbia - we are on that path, there are no ideal relations, but it is important that they exist," Vucic said.